Terrorist groups have nothing to do with Islam: Iran president 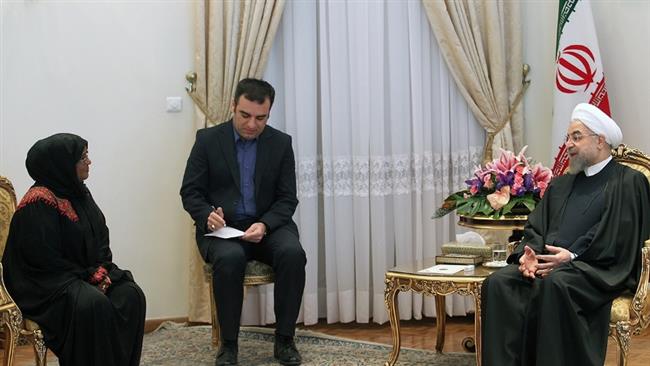 Iran’s President Hassan Rouhani has underlined the necessity of concerted efforts by the international community to combat extremism, adding that terrorists have nothing to do with Islam.

“Unfortunately, many terrorist groups are operating in the name of religion and Islam, but their ideology and conduct bear no affinity to Islam,” Rouhani said on Monday.

The Iranian president made the remarks in a meeting with new Kenyan Ambassador to Iran Ruqyah Ahmad Sabu in Tehran, where the Kenyan official submitted her credentials to the president.

Rouhani said the heinous crimes committed at the hands of terrorist groups, including Boko Haram, have drawn global condemnation from people all across the globe.

The notorious terrorists group says its goal is to overthrow the Nigerian government. The terrorist group has claimed responsibility for a number of deadly shooting attacks and bombings in various parts of Nigeria since the beginning of its operations in 2009, which have claimed lives of thousands of people.

The Iranian president further described Kenya as an important and influential country in East Africa, calling for the further enhancement of all-out ties between Tehran and Nairobi.

The Kenyan official, for her part, expressed her country’s willingness to expand relations with the Islamic republic in tourism and development sectors.

Also on Monday, in a meeting with new North Korean ambassador to Tehran Kang Sam-hyon, President Rouhani condemned the US meddlesome and bullying policies in the region.

“We always condemn illegal sanctions and we should resist pressures and hegemony through cooperation,” Rouhani said, adding, that US sanctions against North Korea have merely affected the people of the country.

The Korean official, for his part, said the Iranian government and nation have achieved to thwart the US conspiracies and defend their right to use peaceful nuclear energy program.

In a separate meeting with new Jordanian ambassador to Tehran Abdullah Sulaiman Abdullah Abu Romman on Monday, president Rouhani described the Israeli regime’s occupation of Palestine as the root cause of problems in the Middle East.

“Today, the world public opinion not only refuses to tolerate the Zionist regime’s oppression and aggression but also condemns them,” said Rouhani.

Rouhani voiced Iran’s support for the stability and security in the Middle East, adding that the Islamic Republic seeks the resolution of the Palestine issue and return of Palestinians to their homes.

The Iranian president further stated that Tehran is willing to expand friendly ties with Amman in different economic, cultural and political spheres, calling for bilateral consultations on regional and international issues.

The Jordanian official, for his turn, said his country considers the Islamic Republic as an influential country in the region and called for the enhancement of ties with Tehran in various domains.