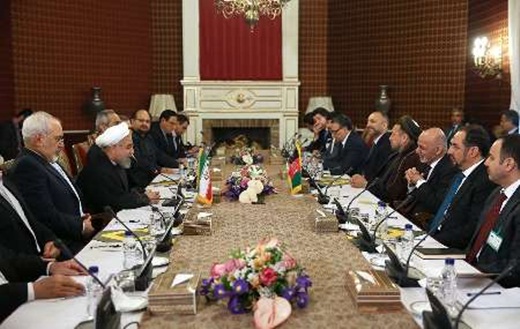 President Rouhani said a more secure and developed Afghanistan will lead to more trade exchanges and an upgrade in Tehran-Kabul social and cultural interaction.

President Hassan Rouhani said in Tehran on Sunday that Tehran and Kabul are determined to share views and cooperate in fighting extremism and terrorism in the entire region until the elimination of the menace.

Speaking at a joint meeting of senior Iranian and Afghan officials, President Rouhani said that transit of goods and trade between Iran and Afghanistan is among main programs for expansion of Tehran-Kabul relations.

While welcoming Afghan President Mohammad Ashraf Ghani and his accompanying delegation, Rouhani said, “I hope that the visit and its outcomes will pave the way for further expansion of bilateral relations in all areas of interest.”

He lauded the National Unity Government of Afghanistan for its attempts to restore calm and gather representatives of all ethnic groups in his government and said, “We are very happy to witness unity and fraternity in Afghanistan and such a national integration is necessary for public development and welfare. Mutual confidence of people and government is the highest national asset and its result is stability, security and subsequently development which is both in favor of Afghan people and regional nations.”

The Iranian president said the more secure and more developed Afghanistan is, the higher trade exchanges will be and as a result, social and cultural interactions between Iran and Afghanistan will be upgraded further.

He then referred to the presence of Afghan refugees in Iran over the past decades and said there is no impediment to their presence, economic activity and their use of scientific and educational facilities.

He added that however, the two governments are seriously calling for clarification of the number and precise conditions of all the Afghan refugees in Iran, their registration through legal channels and eventually respectful repatriation.

On common concerns of Iran and Afghanistan about security problems and terrorist activities in the region President Rouhani said, the region is facing enormous problems and “We are deeply unhappy and concerned about the killing of innocent people by terrorists; so, both sides voice their readiness to share views and cooperate in countering the menace of extremism and terrorism in the entire region until its elimination.”

Touching on production and trade of narcotics as a danger to both Iranian and Afghan nations, Rouhani said by sharing opinion and further coordination between Iran and Afghanistan, Afghan farmlands should be turned into source of blessing for Afghan and regional people and to this end the Islamic Republic of Iran is ready to extend any kind of assistance to Afghanistan to eradicate poppy cultivation. “Of course, we should expand mutual cooperation in fighting drugs smugglers.”

The President also referred to his talks with his Afghan counterpart on bilateral, regional and international issues and said, “Both countries want the establishment of peace and stability in the entire region, believing that in regional countries, including Yemen, problems cannot be settled through military means. Using planes and bombardment will not be effective, rather, in any country, people and political groups should fix their own problems through national dialogue and other governments and neighbors should prepare the ground for holding the dialogue, added Rouhani.

While emphasizing the need for cessation of attacks and clashes in Yemen, Rouhani said, “We should help all Yemeni groups to enter into talks at a single table and we all have a share in the future government of the country so that security, stability and calm are restored to the country.”

For his part, the Afghan president thanked his Iranian counterpart for warm hospitality accorded to him and said the Afghan government is determined to settle certain problems, using all the existing opportunities to promote peace, cooperation, welfare and stability for people of Iran and Afghanistan.

Saying that refugees’ problem is vital to the Afghan government, Ghani said, “I deem it necessary to laud your help and attention to your Afghan brothers and the assistance you have provided in connection with Afghan problems and people over the past years.”

He said his country has a master plan for the Afghan refugees, wanting registration of the arriving immigrants and those present in the Iranian territory so that precise information on their presence and status in Iran can be collected and ground can be prepared for their repatriation to Afghanistan.

He went on to say that regional security is common concern of both Iran and Afghanistan, adding that unfortunately, Afghanistan is the focus of international terrorism and we want cooperation and pooling views on seriously encountering all terrorist groups.

He suggested a joint drugs campaign as another area of Iran-Afghanistan cooperation and said countering drugs trade should fall within the economic and security framework and in the first step, the two sides should not ignore fighting drug smugglers in the security domain.

The Afghan president also urged expansion of Iran-Afghanistan relations in the fields of trade, farming and energy and said Kabul is keen on connection of Iranian railway to Afghanistan and then to Tajikistan and China.

Noting that Iran and Afghanistan enjoy peaceful borders, he called for further expansion of cooperation between the two neighbors and said, “Afghanistan is willing to turn into a hub of international cooperation but at the same time it will not allow its territory to be used against any of its neighbors.”