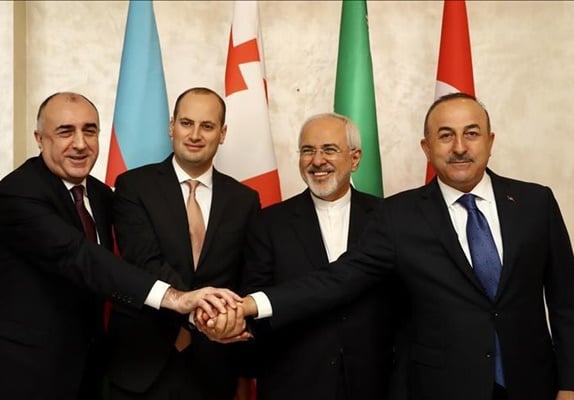 The first quadrilateral meeting of the Ministers of Foreign Affairs of Iran, Azerbaijan Republic, Georgia, and Turkey wrapped up on Thursday with a joint statement that called for expansion of quadripartite cooperation between the four states.

In this statement, the four foreign ministers reaffirmed commitment to further enhance solidarity and cooperation among the peoples of the four countries based on deep-rooted historical and cultural ties that will serve to strengthen peace, stability, prosperity in the region.

They expressed their satisfaction with the growing cooperation among their countries and emphasized their common interest to strengthen regional peace and stability.

The four top diplomats agreed to explore and extend quadrilateral cooperation on all possible areas with the aim to ensure prosperity for the people of the four countries.

They agreed to use the existing potential for promotion of investments and trade, as well as to support cooperation by implementing the joint projects and programs, where it is appropriate, in the fields of energy, transport, finance, telecommunication, information and communication technology (ICT), industry, agriculture, tourism and environment.

They also stressed the importance of further enhancement of cooperation for implementation of new projects in order to develop transport infrastructure and increase transit potential of the four countries on “South-West” route starting from Iranian Ports of Bandar-Abbas and Chabahar at Persian Gulf through Rasht-Astara connecting to Baku-Tbilisi-Kars railway.

The four sides underlined the importance of strengthening cooperation in the field of civil aviation, and expressed their willingness to enhance commercial collaboration in the oil, natural gas and petrochemical fields.

They also agreed to encourage relations among the banking networks of the four countries, and underlined the importance of strengthening cooperation to mitigate and prevent environmental degradation.

The four foreign ministers also reiterated their firm commitment to strengthen their cooperation in the fight against terrorism, violent extremism, illicit trafficking in narcotic drugs and their precursors, arms, crimes against cultural and historical heritage, cybercrime, human trafficking and smuggling of migrants.

They also underscored the importance of cooperation in the areas of culture, education, health care, youth exchange, tourism and sports with a scope to expand people-to-people contacts between their countries and expressed their readiness to initiate and promote joint projects and events in these spheres.

The next quadrilateral meeting between the four states is slated to be held in Georgia.