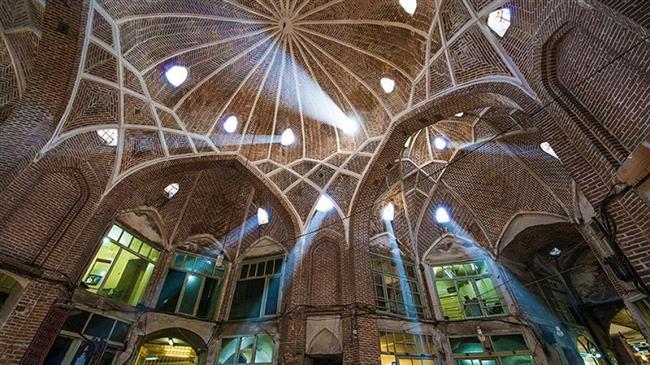 The Grand Bazaar of Tabriz in the northwestern Iranian city of Tabriz is known as the largest roofed Bazaar in the world and the oldest one in the Middle East.

For centuries, the endless labyrinthine of architectural marvels combined with colorful charm of traditional goods and scent of oriental spices has allured visitors of the bazaar.

Located at the center of Tabriz, the complex was one of the most important international trade hubs between the 12th and 18th centuries and it still serves as the economic heart of northwestern Iran.

Many world explorers and writers throughout the history, including Marco Polo, Yaqut al-Hamawi and Jean Chardin, have lauded the glory of Tabriz Bazaar as a remarkable part of their adventures.

In 2010, the UNESCO declared Tabriz Bazaar as a World Heritage Site.

As it was located on the Silk Road, thousands of caravans from different Asian, African and European countries passed though Tabriz bazaar on a daily basis, making it one of the world’s most flourishing commercial hubs over centuries.

Tabriz bazaar saw its most glorious days in the 16th century, when Tabriz became the capital city of the Safavid kingdom, but the city lost status as a capital in the 17th century.

The bazaar, however, still remained flourishing. In 19th century, trade volume at Tabriz bazaar constituted over 25 percent of Iran’s business transactions, passing even higher than that of the capital city of Tehran.

The complex was not built at one phase and different parts were added to bazaar by different architects at several stages.

The bazaar reaches the historic Jameh Mosque of Tabriz to the west, the provincial governor palace to the east and Mehraneh River to the north.

Similar to many other Middle Eastern bazaars, Tabriz Bazaar was a key commercial center for religious minorities, with Armenians and Georgians owning a major part of businesses and conducting important transactions with European and Central Asian merchants.

The bazaar was destroyed as a result of several massive earthquakes, but it was reconstructed afterwards. In the latest case in 1780, the bazaar was completely destroyed by a huge earthquake and was rebuilt flowingly.

In 2,000, the Cultural Heritage Organization of Iran began a renovation project for the bazaar in cooperation with the shop owners. The project won the Aga Khan Award for Architecture in 2013.

The masterfully-designed high vaults and domes of the structure decorated with intricate brickworks and tileworks have turned the complex into an outstanding masterpiece in oriental architecture.

The complex consists of several sub-bazaars or timchehs. The most important and luxurious part of Tabriz Bazaar is Amir Bazaar, also known as Timcheh Amir, where shop exclusively sell gold and jewelry. The section has the largest dome in the entire bazaar.

Another important section is Mozaffarieh Bazaar, also known as Timcheh Mozaffarieh, for sale of exquisite Persian carpets. The most beautiful architectural design in the complex belongs to this section.

Other sub-bazaars are dedicated for the sale of a variety of other handicrafts, foodstuff and household items.

The majority of timchehs and saras consist of three-floor buildings where the first floor is used as the warehouse, the second floor as the business office and third floor as the resting space.

Apart from its economic status, Tabriz Bazaar has also been a hub of key social and political developments in the Iranian history, including Iranian Constitutional Revolution in the beginning of the 20th century and Islamic Revolution in 1979.

It is also a center for holding important religious ceremonies, including Day of Ashura, the martyrdom anniversary of third Shia leader Imam Hussein, when merchants cease trading 10 days in advance to hold different mourning ceremonies and assemblies at the venue.

The iconic complex still continues to wield influence over different cultural, social, economic and political arenas in Iran and it is considered as an outstanding example for coexistence of diverse cultures and a model for constructive interaction among different social strata.