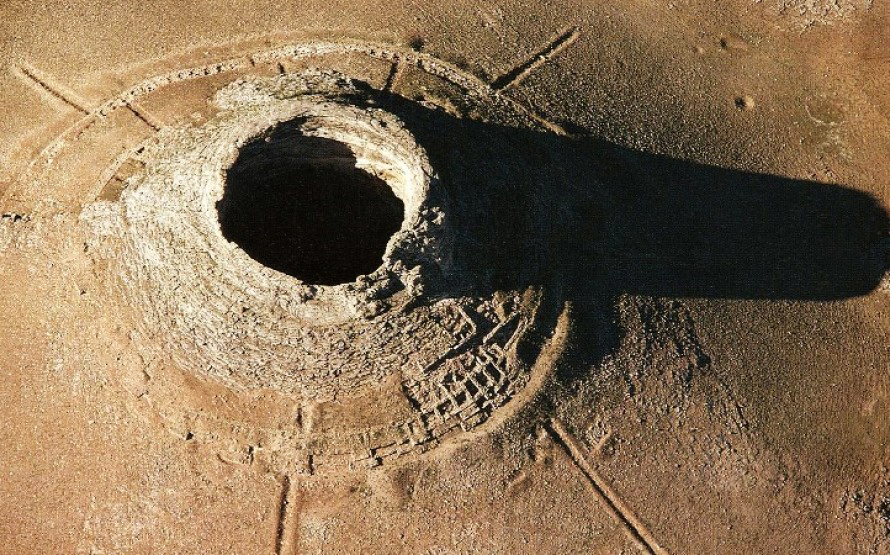 The Solomon Prison or Demon Prison is a 100-metre cone-shaped hill with a horrible hole inside and a strange story, located in Iran’s West Azarbaijan province.

Built during the Sassanid dynasty (between 224 and 651 AD), the cone-shaped prison used to be the scene of sacrifices made and prayers said by the Zoroastrian priests. It is three kilometers west of Takht-e Soleymān in West Azarbaijan.

The hill has been shaped over thousands of years by sediment layers of mineral stones of an ancient lake. It used to be a temple between 830 and 660 BCE with several sulphur hot springs around it for medical treatment.

Unlike other volcanos, the Demon Prison hill is made of sediment layers of mineral stones. There used to be a spring in the region which turned into a lake over time. Its water was filled with salts and sulphur. Through time, the salts resided at the bottom of the lake becoming solid sediment layers. Now, after thousands of years, the layers have shaped a hill with a hole inside. Gradually the lake dried out but its remnants are still visible.

The site is now among one of the most beautiful natural attractions for mountaineers.

The Demon Prison or Solomon Prison is a hill with a horrible hole inside and a strange story.

If you climb the hill, you will see a stone building made by Sarooj mortar standing at its top. The building has hidden a black hole inside with no way out and if somebody sets foot inside, he/she will definitely die.

Locals believe that Solomon jailed a demon who defied him into the hill’s black hole; then tightened its black hole by setting up a building above it.

The demon in the black hole is the same devil who stole a special ring inscribed by the lord’s names from Solomon. The demon is believed to be a very dangerous and furious creature releasing toxic gas from its mouth. Anybody daring to set foot into the black hole will be murdered by the demon, locals believe. That’s why, it is named the Demon Prison.

The fortified site is the first attraction of West Azarbaijan recognized as a World Heritage site in July 2003.

Below you can see photos of Demon Prison: