“Bahrain is entangled in an internal crisis and is after a foreign enemy to divert the public opinion from the issue and [making] such remarks are repeated,” Foreign Ministry Spokesman Bahram Qassemi told reporters in his weekly press conference in Tehran on Monday.

He underlined that if the Bahraini officials open their eyes to realities, they will understand that “such claims are baseless”.

Qassemi advised the Bahraini rulers to restore the law and resolve their internal problems peacefully. 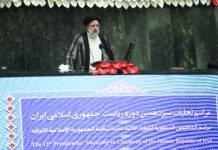