“Saudis’ Sham Anti-Terror Alliance Does Nothing in Reality” 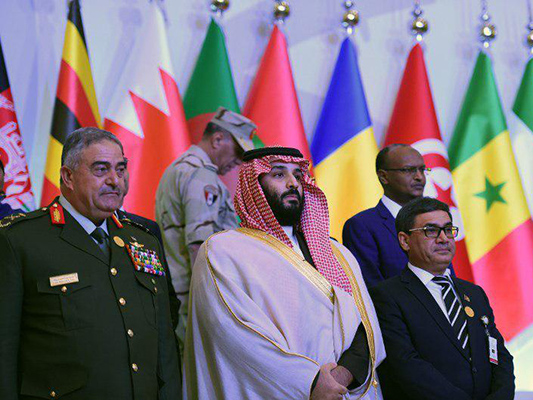 An Iranian newspaper has harshly criticized Saudi Arabia for forming an alliance which ostensibly seeks to fight terror, but in reality does nothing but confronting countries like Iran.

The Persian-language Jomhouri Eslami newspaper has published an editorial on an anti-terrorism coalition of forty countries. The full text of the article follows.

An anti-terror alliance of 40 Arab and Islamic countries has been formed in the Saudi capital, Riyadh. Nowadays, Riyadh has turned into a hub of efforts to restore its reputation, but the point is that such measures by Saudi Crown Prince bin Salman are doomed to fail and regarded as an abortive attempt to revive paper coalitions.

It is claimed that defense ministers of 40 Arab and Islamic states were present in Riyadh to announce the formation of the alliance, but reports suggest not all the representatives of those countries were defense ministers and some had taken part in the meeting at lower levels such as the ambassador, chargé d’affaires and military attaché.

So far, the formation of the alliance is a sign of Salman and his son’s failure to establish a military-security-political alliance comprising 54 Arab and Muslim countries. In fact, Salman and his son announced the formation of such an alliance in the presence of US President Donald Trump, but it did not last a single day and it was proved that it was not even a paper coalition.

Now, the absence of 14 countries on the new list of the alliance despite months of hard effort by Salman and his son indicates a drop in the power and popularity of the Al Saud dynasty in the Islamic world, especially in the Arab world. Moreover, some countries have already announced to Riyadh that their ceremonial presence will not go beyond the current level. Moreover, even the current alliance has faced uncertainty in regional and Western media. Even in the US, the Americans have reacted to the unexpected developments in Riyadh with reluctance. Despite attending previous meetings and calling Saudi Arabia the hub of war on terror, Trump had to announce that he had asked Salman and his son to end support for terrorists.

Washington is still grappling with the consequences of this overt contradiction, and has failed to make its closest allies ponder on this question: How is it possible for Saudi Arabia to seek to export terrorism and be the standard-bearer of terrorists, and at the same time be regarded as the hub of fighting terrorism and lead others in the campaign against terror? Such a big political scandal has been met with objection even from within Trump’s team, particularly the US departments of state and defense as well as different sections of the army and Central Intelligence Agency. If fact, the United States’ remaining global credibility has come under the hammer for the sake of Al Saud more than ever before.

It is highly unlikely that even official members of the new alliance would want to, or would be able to throw their weight around more than previous alliances. With the formation of the alliance Decisive Storm, Saudi Arabia claimed that it had won the backing of 10 countries against Yemen. However, it became evident in practice that only the Saudis are actively present in the alliance, and that they have not been able to maintain even one infantry soldier on Yemeni soil.

Bin Salman then declared the formation of an anti-terror coalition comprising 34 Arab and Islamic countries, but failed to bring together even ten of the countries on the alleged list under one roof for a media show. That means bin Salman is very skillful in forming such weak alliances which will not last even one week.

Suppose such an alliance is going to be formed against terrorism; then where is it going to go into action? Syria? Iraq? Lebanon? Yemen? Bahrain? Or …? Regional nations and governments, and, on a larger scale, the Muslim world, may not be aware of that, but the US and its allies within NATO know well that at a time when terrorists were under siege in Aleppo, the Saudis were insisting that they should go into action in favour of terrorists in Syria and deal a blow to the Syrian army and Bashar Assad.

The Saudis even opted to pressure Obama’s US as well to get it on board with them to launch military action against Russia, Iran and the resistance front in Syria and Iraq. Of course, then US Secretary of State John Kerry gave the Saudis the cold should. He suggested that if Riyadh was seriously determined to launch such an operation, it needed to go into action on its own and accept the repercussions as well.

Now, with the domination of the ISIS terrorist group in Syria, Iraq and Lebanon coming to an end, what can the formation of an anti-terror alliance comprising 40 Arab and Islamic countries mean and what application will it have? Moreover, experience shows if support and assistance for terrorists are cut off and they are put under complete siege, their major strongholds will fall in a short time. Therefore, in order to destroy the terrorists’ remaining bastions, Saudi Arabia is urged to immediately stop exporting terrorists and sending assistance to them and not further fuel the scandal gripping them.

The isolation of the Saudis today and revelation of different dimensions of bin Salman and his son’s isolation not only in Saudi Arabia, but within the al Saud government, show the political-propaganda moves by Salman are aimed at deflecting public attention and covering up the divisions within the ruling elite and the power structure in Riyadh. Reports on the mass arrests of defiant members of the royal family in Saudi Arabia and other Saudi authorities who believe the current trend in Saudi Arabia has reached a stalemate show Saudi statesmen do not see eye to eye on this issue, and are isolated within the ruling elite and have been left alone.

I wish Salman and his son had not published the picture and pictorial report on the officials taking part in a meeting of the 40-strong alliance of Arab and Islamic states because the release of photos and videos brought to light the fact that the ceremonial meeting was more ceremonial that previous ones, and that many of the participants were among the ambassadors, chargé d’affaires and military attaches of certain countries which are still in Riyadh’s camp. Even their defense ministers were not present, and even if they had been, their presence would not have contributed to the credibility of the paper alliance a bit.