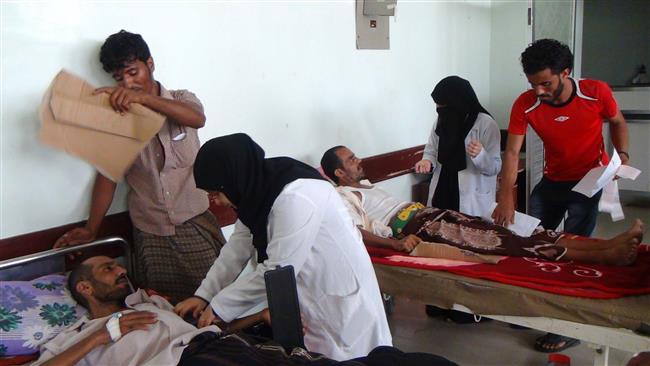 “It is unacceptable that wounded Yemenis are denied access to medical aid because of the continuation of the cruel naval and aerial blockade, the deputy foreign minister said.

“It is unacceptable that wounded Yemenis, particularly children and women, are denied access to medical aid because of the continuation of the cruel naval and aerial blockade, and that it is not possible to move them out of Yemen for treatment,” Amir-Abdollahian said on Tuesday.

He made the remarks in a meeting with Head of the International Committee of the Red Cross (ICRC) in Yemen Cedric Schweizer in Tehran.

The Iranian diplomat also emphasized that the Geneva-based ICRC plays a significant role in the delivery of humanitarian aid to the defenseless Yemenis, calling for the quick transfer of food and medical consignments to Yemen.

Amir-Abdollahian also voiced Iran’s readiness to put its humanitarian supplies at the disposal of ICRC.

Schweizer, for his part, briefed the Iranian deputy foreign minister on the ongoing ICRC efforts in Yemen, urging regional countries to send their humanitarian aid consignments to Yemen via ICRC bureaus in the southern Omani port city of Salalah as well as the African country of Djibouti.

On May 27, the World Health Organization (WHO) said in a statement that innocent Yemeni people are paying the “highest price” for the deadly Saudi aggression against the country.

WHO Director General Margaret Chan warned about the dire medical situation in Yemen due to the Saudi airstrikes and the ongoing conflict in the country, saying, “Almost 8.6 million people are in urgent need of medical help.”

According to the UN, nearly 2,000 people have been killed and 7,330 injured due to the conflict in Yemen over the past weeks.

Saudi Arabia launched military attacks against Yemen on March 26 – without a UN mandate – in a bid to undermine the Houthi Ansarullah movement, which currently controls the capital, Sana’a, and major provinces, and to restore power to Yemen’s fugitive former President Abd Rabbuh Mansour Hadi, who is a staunch ally of Riyadh.