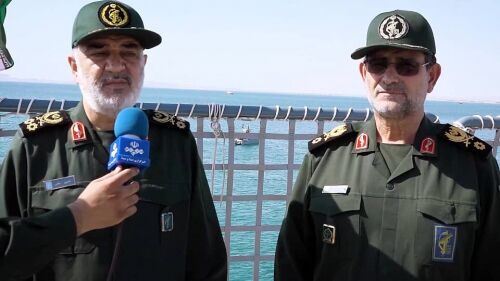 The commander of Iran’s Islamic Revolution Guards Corps has said the IRGC’s Navy has full dominance over the Persian Gulf and the Strait of Hormuz thanks to its sophisticated electronic warfare systems.

Major General Hossein Salami said this is something we can be proud of.

Salami made the comments on Friday as he inspected naval units of the IRGC in the Persian Gulf and the Strait of Hormuz.

Salami also added that all the missile and electronic warfare systems as well as drones and underwater weapons of the IRGC’s Navy are domestically built.

He said the naval units are highly prepared to confront and rapidly respond to any threat decisively.

The Islamic Republic has beefed up its military might considerably in recent years amid military threats from the US and the Zionist regime. Tehran has warned its adversaries against any aggression against the country, saying such a miscalculation will have dire consequences for aggressors.