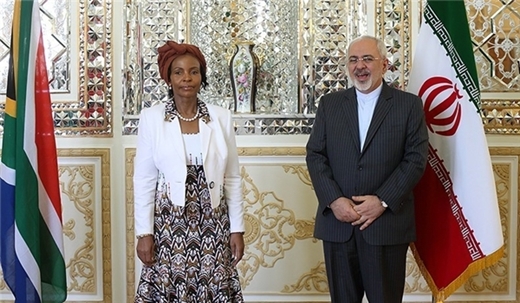 We support the trend of the talks between Iran and P5+1 and believe that the US Senate measure can slacken this trend, said the South African foreign minister.

South African Foreign Minister Maite Nkoana-Mashabane stressed her country’s opposition to the sanctions against Iran, calling the embargos as “illogical and illegal”.

“We have never supported the sanctions against Iran and believe that they are illogical and illegal,” Mashabane said, addressing the inauguration ceremony of the 12th Joint Iran-South Africa Economic Commission co-chaired by Iranian Foreign Minister Mohammad Javad Zarif in Tehran on Sunday.

She referred to the nuclear talks between Tehran and P5+1 (the US, Russia, China, Britain and France plus Germany), and said, “We support the trend of these negotiations and believe, within the same framework, that the US Senate measure can slacken this trend.”

Zarif, for his part, described relations between Tehran and Pretoria as excellent, and said, “We can witness expansion of bilateral ties in all fields using the existing capacities.”

The US Senate on Thursday advanced a legislation that would allow the Congress to review a nuclear deal between world powers and Iran.

Reading out a joint statement at a press conference with EU foreign policy chief Federica Mogherini in Lausanne on April 2, Zarif said according to the agreement, all the US, EU and UN Security Council sanctions against Iran would be lifted under the final deal.

The delegations of the seven nations are now drafting the final deal.