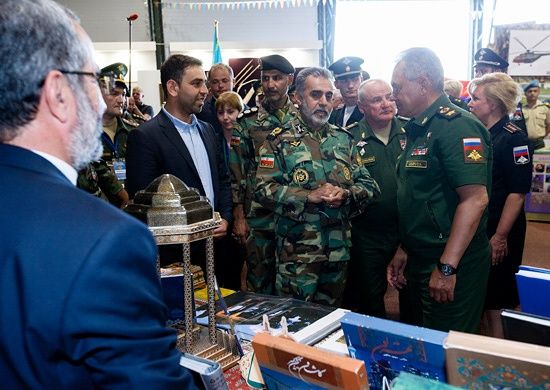 Russian Defence Minister has visited Iran’s cultural pavilion in Moscow on the sidelines of the International Army Games – 2017 and has been presented with a precious piece of Iranian artwork there.

On Sunday (August 13), Russian Defence Minister Sergey Shoigu paid a visit to Iran’s cultural pavilion in Alabino park in the Russian capital, Moscow, where the Middle eastern country, along with 17 other states, were holding a group exhibition on the sidelines of the International Army Games – 2017.

According to a Farsi report by the Asr-e Iran news website, during this visit, Shoigu was briefed on the items showcased in the pavilion and was presented with a precious paisley fabric in a wooden frame as a sign of Iran’s long-lasting culture and civilization.

Iran’s pavilion has been set up by the cultural office of the Iranian Embassy in the main venue where the International Army Games were being held.

Iranian artefacts as well as books in Russian and English, such as the one titled “Iran, the Cradle of Peaceful Religious Coexistence”, have been showcased in Iran’s pavilion in the exhibition.

Posters featuring photos of the Sacred Defence (eight-year war imposed by Iraq on Iran) and stories of the imposed war as well as accounts of the operations performed by Iranians in that war, were put on display in Russian in Iran’s pavilion.

Among the artefacts on display in the Iranian pavilion were calligraphy works, miniatures, dishes with vitreous enamel coating and marquetry artworks. Iran’s tourist attractions were also presented in the country’s pavilion in the Moscow-based expo.