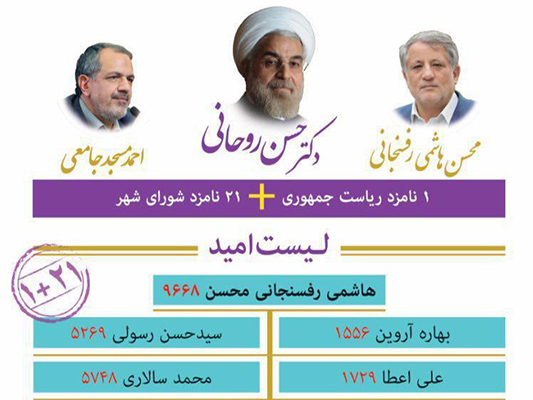 Reformist and moderate candidates have won all the 21 seats of Tehran’s City Council according to the final results declared by Tehran governor, ending the 15-year dominance of conservative councillors.

According to the official final results, all the seats of Tehran’s City Council have been given to the List of Hope, which consists of pro-reform and moderate candidates who supported President Hassan Rouhani for presidency.

Tehran’s Governor Issa Farhadi said on Sunday that the candidates in the List of Hope have won all the seats in Tehran.

Only two conservative candidates, namely Alireza Dabir and Mahdi Chamran, have scraped in a place among 11 reserves, Press TV reported.

This means an end to the almost 15-year dominance of conservative councillors over Tehran’s city council.

The results have further jeopardized the position of current Tehran Mayor Mohammad-Baqer Qalibaf who ran in the presidential race only to withdraw in favour of Rouhani’s leading challenger, Seyyed Ebrahim Raeisi.

Early results show that reformist and moderate candidates have defeated their conservative rivals in most major cities of Iran, including Karaj, Isfahan, Tabriz, Shiraz, and even Mashhad, where the majority of voters usually picked conservative candidates.