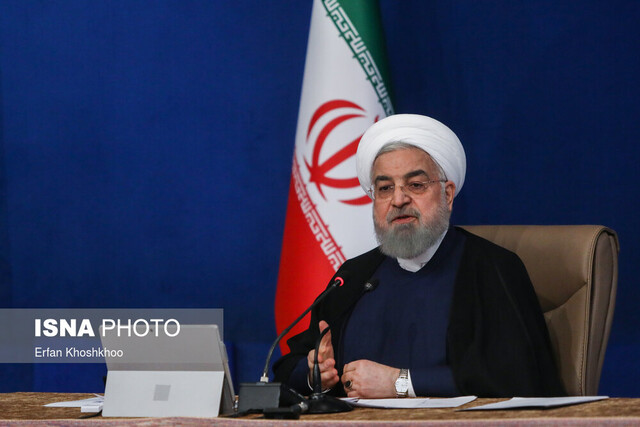 Iranian President Hassan Rouhani has lashed out at French President Emmanuel Macron for his anti-Islam stances, and praised the Muslim world for its “decisive and timely” reaction to the European leader’s insult.

Speaking in a weekly cabinet session on Wednesday, President Rouhani said disrespecting a prophet is not only not a skill, but also an immoral act, encouraging violence and hurting the feelings of billions of Muslims and non-Muslims.

The president called the great Prophet of Islam (PBUH) the teacher of humanity and mercy for the entire mankind, calling on those who have made mistakes in this regard to make up for their mistakes as soon as possible and return to the path of justice, morality and respect for the beliefs of all the heavenly religions.

“It is surprising that those who claim to be rich in culture and democracy, in some way, albeit unintentionally, encourage others to violence and bloodshed,” he noted, referring to Macron’s recent anti-Islam stances and his support for an offensive caricature of Prophet Muhammad (PBUH).

Freedom does not mean closing down the lessons of morality, the president said, adding, “On the contrary, freedom can be useful to society when all values are respected, not insulting a person to whom everyone is indebted.”

“Each and every European and all those who live in the East and the West are indebted to the Prophet of Islam.”

Rouhani said “Westerners should understand that the great Prophet of Islam is loved by all Muslims and freedom seekers in the world. Insulting the Prophet means undermining morality and insulting all Muslims, all divine prophets and human values.”

“If the West, Europe and France really seek peace, brotherhood and security in the human society as they claim, they should stop interfering in the internal affairs of Muslims because all the problems and grudges held in their hearts are because of the oppression, persecution and inappropriate interference of the West in the affairs of Muslims throughout history.”

He said “a clear example of this is Yemen today, where you see the poor, innocent people of Yemen are being killed under various Western-made bombs and the planes that the Westerners gave to the invading countries.”

“The lesson of the Prophet is the lesson of respect for others, morality, and freedom… Obscenity, insulting, swearing and drawing caricatures are not part of morality, democracy and humanity.”