Restored Sphere by Arnaldo Pomodoro is unveiled in a Tehran Museum 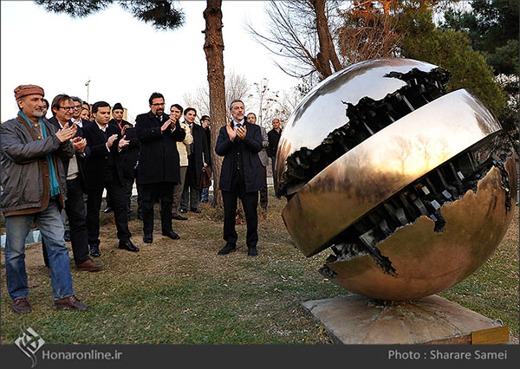 Organization of such a ceremony is a reflection of good relations between Iranian and Italian artists, said the director of Tehran Museum of Contemporary Art.

On January 20, honaronline.ir posted a report on a ceremony in which a restored Sphere sculpture by veteran Italian sculptor Arnaldo Pomodoro was unveiled. The following is a partial translation of the piece:

The Sphere, a sculpture by Italy’s Arnaldo Pomodoro, was unveiled at Tehran Museum of Contemporary Art with Director of the Visual Arts Center Majid Mola Nouruzi, Italian Ambassador to Iran Mauro Conciatori, Mazdak Feiznia representing the Feiznia Foundation, Hamid Ayni, a sculptor, a representative of the Pomodoro Foundation and a number of visual arts enthusiasts in attendance.

At the ceremony, before the artwork was unveiled, Mola Nouruzi said, “Organization of such an event is a reflection of good relationships between Iranian and Italian artists, and we are honored that there is an artwork by Pomodoro at Tehran Museum of Contemporary Art.”

He added, “Restoration of the work which was carried out with the permission of the sculptor is a symbol of purging the earth of dust, attention to the environment and respect for artworks,”

As for Iran’s substantial presence after four decades in Venice Biennial next year, he stated, “Venice Biennial is a world event for the display of arts and fortunately, at the event next year, we are given an area 10 times bigger than that of previous years’.”

Thanking the Feiznias who contributed to the restoration of the sculpture, Italian Ambassador to Iran Mauro Conciatori said, “The sculpture was long exposed to pollution and had lost its luster, so it needed restoration.”

He went on to say, “From my perspective, the presence of an artwork by the Italian artist in Tehran and the attention given to its maintenance remind us of the strong historical bonds between Iran and Italy. Although a gap has appeared between the two countries in the past, art once again has brought them together.”

As for relations between the Italian Embassy with Tehran Museum of Contemporary Art, Conciatori stated, “Relations between the two are extremely good and pretty soon we will embark on a lot of joint programs. An exhibition featuring artworks by Iranian-Italian artist Bijan Basiri at Tehran Museum of Contemporary Art as well as another expo showcasing the works of Bianchini, an Italian physician who lives in Iran, in the same museum are examples of such cooperation; the artworks of such artists are like a bridge linking the two nations.”

The representative of the Pomodoro Foundation at the ceremony said, “Pomodoro could not travel to Iran to observe the restoration of its work because of old age.”

Arnaldo Pomodoro, an Italian sculptor and artist, was born in the Italian city of Morciano in 1926. At present, he lives in Milan. The artist is well known for his spherical and columnar sculptures. Some of his works are on display in the Vatican Museum, Trinity College, Dublin, the United Nations Headquarters in New York, the Hirshhorn Museum and Sculpture Garden in Washington D.C, Christian Theological Seminary in Indianapolis, the de Young Museum in San Francisco and the University of California, Berkeley.

Of his artworks in Iran, one is on display at Tehran Museum of Contemporary Art; another is housed in the library of Niavaran Palace; and a third stands outside the parking lot of Eram Amusement Park.