Give Kashke Bademjan a shot 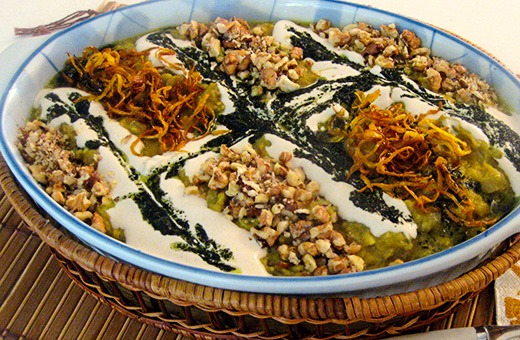 Give a shot at cooking Kashke Bademjan and get your kitchen filled with a wonderfully rich aroma.

Iranian dishes excel at making people who have never tried them fall in love at the first bite. The unique combination of spices and flavorings with a wide range of vegetables, herbs, fruit, grains, nuts, meat and most importantly rice only needs the wand of Iranian cuisine to perform magic and leave an explosion of unforgettable tastes in the mouth. Their delectable smell, delicious look and perfectly pleasant taste make it almost impossible to resist them. To share the gastronomic delights of Iran, IFP has decided to file a series of recipes for mouth-watering Iranian dishes.

Kashke Bademjan is an irresistibly delicious Iranian spread whose main ingredients are whey – Kashk – and eggplant – Bademjan. Its easy recipe prompts even rookie cooks to try it out and be extremely pleased with the outcome. The dish can be either served with flatbread as an appetizer or as a light supper.

1. Six eggplants – Peel the eggplants, cut them in half lengthwise. Sprinkle the halves lightly with salt, so that both sides of the eggplants are thinly coated with salt. Let the eggplants rest in a sieve for at least an hour – if you are hard pressed for time – to allow the brownish liquid to come out of them and pass through the sieve. This will get bitterness out of eggplants. Afterward, fry them on both sides over a low heat. Eggplants tend to absorb too much oil, so it is very important that you fry them over a low temperature and avoid pouring too much oil at once into the frying pan, because if you do, a lot of oil will later come off fried eggplants and you will end up having a too oily dish. To get rid of the excess oil in fried eggplants, you can leave them on paper towels.

2. Two to three large onions which should be peeled and sliced.

3. One small bulb garlic whose cloves should be peeled and sliced.

8. ¼ teaspoon ground saffron * (optional) – can be used to garnish the dish. If you decide to use saffron, you will need a pestle and mortar to grind it into powder; the powder should not be prepared much in advance, because it will lose part of its aromatic smell. You had better brew it with a little hot water to have better color and aroma. A small amount of whey can be mixed with brewed saffron to be used as a garnish.

How to cook Kashke Bademjan

1. Fry the eggplants as it was mentioned earlier. You can purée the fried eggplants with a hand blender or in food processor.

2. Fry the onions in a frying pan with salt, ground black pepper and a liberal amount of turmeric until they turn golden brown. Divide them in autocad. One part will be later mixed with other ingredients and the other should be put aside to be used as a topping.

3. Fry the sliced garlic with the same spices over a medium heat. Garlic tends to get burnt very quickly, so you need to stir it frequently. As soon as the slices turn golden, spoon them out of the pan and put some aside to be used later as a garnish. The rest is going to be mixed with other ingredients.

4. Pour a good drizzle of oil into the pan and add the ground dried mint leaves to it. Turn the heat to its lowest setting and leave the mint in hot oil for one or two minutes. If you get the mint burnt, it will get a bitter taste. The mint powder is sensitive to the heat, so you need to be careful not to burn it. Like onion and garlic, you need to divide the fried mint into two parts.

5. Put the eggplant purée in a pot. Add pepper and turmeric to it to taste. Put a few spoons of whey aside to be used later as a garnish over top. Dilute the rest of the whey with ½ cup water and pour it over the mashed eggplants. Put the pot over a medium heat and mix the mixture well. Turn down the heat and let them mix well. You need to stir it from time to time. If you find the mixture too thick, you can add a little more water to it. Give the mixture about 10 to 15 minutes to get well blended. Afterward, add fried onion, garlic and mint to it and then get the pot off the burner.

6. Add the walnut pieces to the mixture and give it a good stir. Place the mix on a platter and garnish it with fried onion, garlic, mint, whey, saffron and walnut. The dish is served with flatbread.