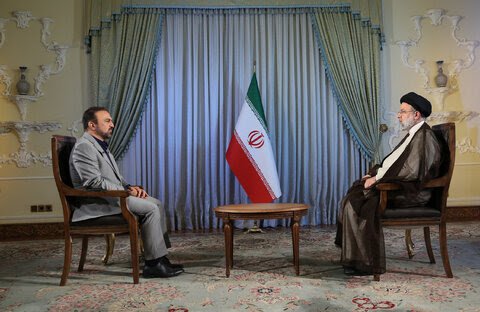 In an interview with the IRIB, Raeisi said Iran is serious about result-based negotiations, noting
that the sign of seriousness on the part of the other side is the removal of sanctions on Iran.

He however noted that his administration will not tie people’s livelihoods and the Iranian economy to the nuclear talks.

Raeisi said Iran has never walked away from the negotiating table and is ready for talks.

The president referred to his promise before the formation of his cabinet to pursue the issue, saying the Foreign Ministry is now doing just that.

Raeisi reiterated that Iran sticks by its word and that it conveyed this message to the envoy of the European Union.

Elsewhere in his comments, the Iranian president spoke of the country’s membership in the Shanghai Cooperation Organization, SCO. Raeisi said Iran’s access to the SCO linked the country to the economic infrastructure of Asia and that all economic activists should avail themselves of this potential.

He added that Iran has a good capacity for increasing exports to the region, including neighboring countries.

Raeisi said Iran’s current economic standing in regional trade is not good, adding that strengthening ties with neighboring and regional countries is a priority and “I want all economic activists to be ready for a different movement in economic and trade ties in the region”.

Asked about his appointment of a special envoy for Afghanistan and Iran’s stance on the developments in the war-ravaged country, Raeisi said, “As we have said before, we support the formation of an inclusive government with the participation of all ethnic groups in Afghanistan”.

He however noted that, apart from the need to create a broad-based government, what matters now is the presence of the Daesh terror group in Afghanistan as a creation of the US.

The president said this “US-made group” is destabilizing Afghanistan but our strategy regarding Afghanistan is to establish unity and stability there. Raeisi noted that Deash is sowing sedition in different countries including Afghanistan.

He also urged Afghanistan’s rulers to stand up to the terrorist group’s crimes against the Afghan people.