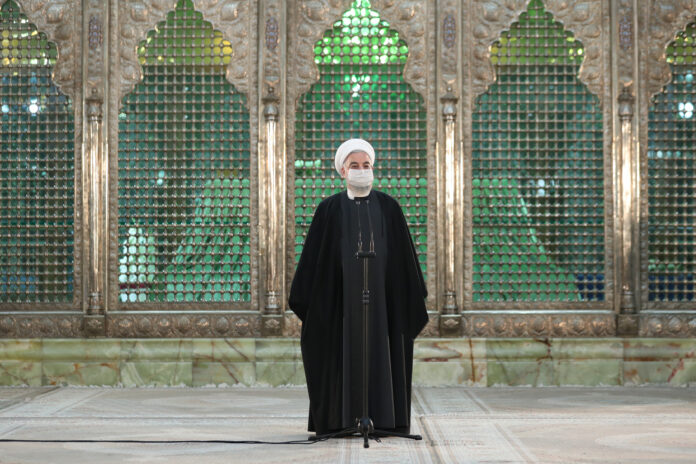 Iranian President Hassan Rouhani and a number of his cabinet members renewed their allegiance to the ideals of Imam Khomeini, the founder of the Islamic Republic, ahead of the anniversary of

Speaking on Monday after renewing allegiance with the ideals of the late Imam on the forty-second anniversary of the Islamic Revolution, President Rouhani said Imam Khomeini, the great architect of the Islamic Revolution, did not choose to rely on outsiders and foreign powers for success because he considered the main power to be the power of the people and chose the way in which the people were the central point.

“Imam Khomeini knew for many years that soft power would prevail over hard power, so he chose soft power, and February 1, 1979 showed well how the Imam was victorious in this way,” he said.

Rouhani said the people’s huge turnout on February 1 in welcoming the Imam back from exile was for the Imam himself.

“The Imam did not allow the tyrannical power that had exiled him to return him back. He first expelled them all from the country and then prepared the ground for his victorious return,” he said.

The people’s great reception, from Mehrabad Airport to Behesht Zahra, showed how influential and popular Imam was among the people, he added.

“Imam’s speech on February 1, 1979 in Tehran, which was his first speech after 14 years away from home, is the charter of our republic and Islamic system and the foundation of our system.”

Rouhani said as long as we are in touch with the words and logic of Imam in that speech and implement it, we will remain victorious.

President Rouhani went on to say, “In the historical speech Imam delivered next to the shrine of the martyrs of this land, he did not speak only about religious legitimacy, but about the acceptance and vote of the people and even about rationality.”

The president added, “Our fathers are not our guardians and we must vote and decide on our system. Imam spoke of rationality, legitimacy and Islam, and with strong reasons, determined the path and future path of the revolution for us.”

President Rouhani added, “The Imam told us in February 1979 that a system is legitimate that is based on the opinion and vote of the people within the framework and principles of Islam, and our path is the one he chose for us.”

Referring to Imam Khomeini’s words about the approval of the government, the president said, “Even when the Imam said, ‘I appoint the government based on the trust of the people,’ this was an important statement in Shiite ijtihad and the political jurisprudence of Islam and Shiism.”

The path of the Imam can lead to the survival of the system that he founded, the President said, adding, “Following the path of Imam is not just to read and repeat his words.”

The President went on to say that the values ​​of the revolution, such as Islam, republic, justice, independence and freedom, are fixed for us, but the methods are not fixed, adding, “In any condition, we have to choose a method in accordance with the time.”

Referring to the importance of elections, President  Rouhani said, “Maximum turnout in elections is both a vote for the individual and a vote for the principle of the system.”

In another part of his speech, the President said that this year we celebrate the dawn of the Islamic Revolution in a situation where we have gone through a very difficult year since February last year as the imposed economic war and the spread of coronavirus have created many problems for the country and people.

Rouhani also stated that fortunately today, despite all the problems and economic pressures of the enemies, our efforts and the resistance of the people have resulted in both the prosperity of the economy and the health of the society, saying, “Wherever people participated, we could win in every problem.”

“Today, I believe that people are on the side of the system and have accepted that we are the servants of the people and we can continue the path of the Imam for years and even centuries.”

At the end of his speech, President Rouhani congratulated the people of Iran and the family of the late Imam on the dawn of the Islamic Revolution and added, “I hope the soul of the late Imam is satisfied with us and we can continue the path of Imam Khomeini and continue our allegiance with the great architect of the revolution until the end.”