President Brands US Sanctions as Terrorist Act against All Iranians 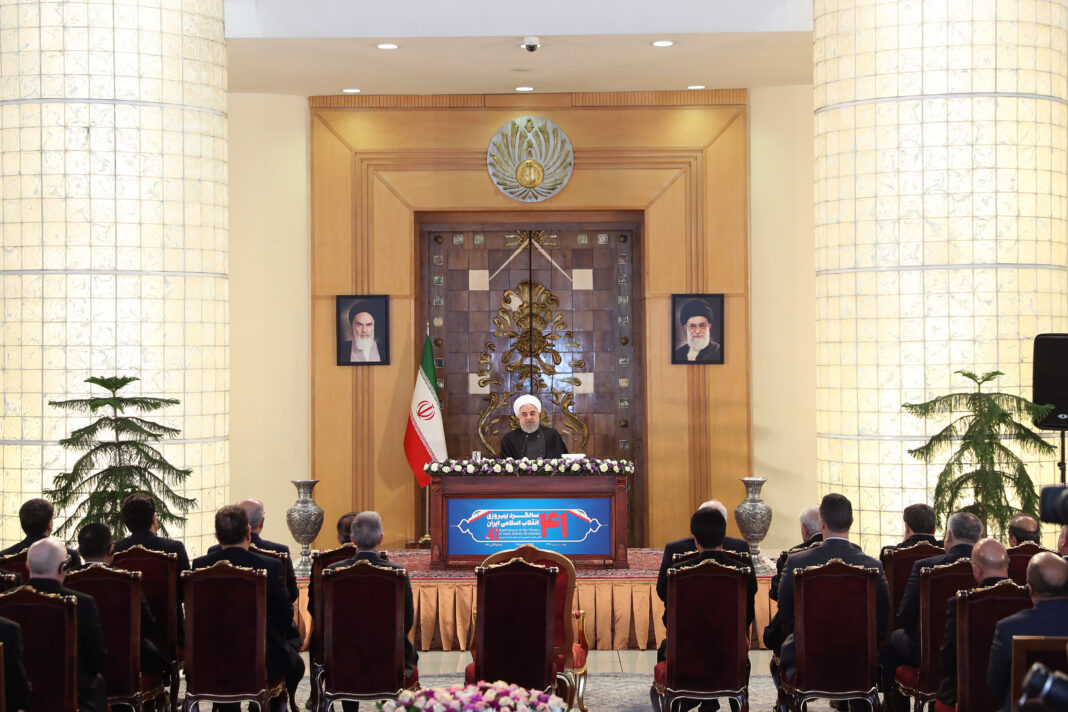 President of Iran Hassan Rouhani has denounced the US sanctions on the Islamic Republic as a totally inhumane measure, saying the cruel sanctions amount to an act of terrorism against all Iranian people.

Speaking in a Monday meeting with foreign ambassadors in Tehran, President Rouhani said, “Those who are familiar with Iran’s civilization and culture know that the great Iranian nation will not yield to bullying and unjust pressures”.
An excerpt of the presidential speech is as follows, according to the president’s official website:

“In the Name of Allah, the Most Beneficent, the Most Merciful

I would like to extend a warm welcome to all the distinguished guests, ambassadors and heads of missions in the Islamic Republic of Iran.

For us, Bahman 22nd is reminiscent of the critical and important memories of 41 years ago and the liberation of the people from dictatorship.

Forty-one years ago, people responded positively to the call of a trusted leader and scholar who called on them to form a movement and revolution to overthrow a rotten and corrupt regime and establish a popular government.

The basis of the Islamic Revolution that achieved victory over 16 years of fight was the movement and presence of the people, not a particular party, group or ethnic group.

The Revolution that was based on national causes and goals was undoubtedly a completely popular revolution that always relied on the people.

Today, we are facing unjust sanctions imposed by the United States against the entire Iranian nation. No one doubts that the maximum pressure and the US sanctions are against each and every Iranian people. This means that not even one person is excluded from these sanctions; a single patient, a single food item is not excluded. No airplane part that is needed for flight safety is excluded. And this is completely clear; a 100-percent inhumane sanction that is against an entire nation. Such sanction may have been less seen in the history of the world.

They are putting these maximum pressures to force the officials to surrender and then the people. Americans are wrong in both of them. Our people and officials do not give in to these sanctions.

The Americans thought they could force the Iranian nation to surrender with maximum pressure on the entire imports, exports and people’s lives. Those who are familiar with Iran’s civilization and culture know that the great Iranian nation will not yield to bullying and unjust pressures.

Despite America’s all-out pressures in the past 20 months, all economic indices since the past 8 months show that Iran’s conditions are completely stable and we have successfully overcome these sanctions and that America has made a mistake. Inflation, economic growth and employment figures show that the Iranian people and government are on the right track.

Although today our people face many problems because of the sanctions, there is no queue across the country for food, medicine, or essentials, for transportation and travel, for scientific study, or for treatment in hospitals. All our conditions today are stable in this country.

We managed the country well last year and this year despite the sanctions, and we needed neither foreign loans nor borrowing from our central bank to run the country.

The US action is against the safeguards of the International Court of Justice in The Hague, which ordered the United States not to initiate sanctions; and also the US actions are contrary to the UN Security Council resolutions including Resolution 2231.

The assassination of a military commander on the territory of a neighboring country that was its official guest is a great crime that violates all international regulations, and no one in our region doubts that General Soleimani was after stability and peace in the region.

It was easy for General Soleimani to kill the American generals if he wanted, but he never did it, and I testify this as someone who was fully aware of the actions of the Quds Force and Commander Soleimani in the region.

The route of General Soleimani was not from the airport to the battlefield, not to a field of action against the United States, but from the airport to a meeting venue with the Prime Minister of Iraq, the highest official of the country, hours later. The great crime is condemned by us, by the world and by the international law.

The third crime of the United States, in addition to dozens of other crimes, is the crime against the Palestinian people and our region, with international regulations and UN resolutions in 1967 and 1973 in place.

According to the international law, the land of Palestine belongs to the Palestinian people, and the Palestinian refugees must return to their country. The US has taken anti-human rights action against Palestine, as it has done so against the Syrian people.

In Iraq, despite the decision of the Iraqi lawmakers and government, it has remained in the country in violation of the international law.

What they are pursuing via the Crime of the Century and want to keep the Palestinian nation permanently displaced from their homeland is a new scandal for the White House, for the American people, and for the American government before it has any effect.

The day the Syrian government asked us for help, we helped them. Our nation is a peace-loving nation against terrorism. We are a nation that has been a victim of terrorism and chemical weapons.

Our nation is a victim of terrorist groups that are still supported by the United States, a victim of terrorists and chemical weapons prepared for Saddam by the Western countries. But we have always sought peace, and today we are seeking peace. What we are saying is for the benefit of the people of the region and even the American people.

Our proposal since the first day (of the current administration) in 2013 was World Against Violence and Extremism (WAVE) at the UN General Assembly and in 2019 again, our proposal at the UN General Assembly was the Hormuz Peace Endeavour (HOPE). What we propose is to fight against extremism and terrorism in the region. Iran’s proposal to the whole world is dialogue and negotiation.

Let the whole world know that we have used our missiles two times; once against ISIS when they killed our innocent people in Khuzestan and Ahwaz and around the Islamic Consultative Assembly. The second time was against Ain al-Assad Air Base in Iraq because of the crimes they committed and assassinated our military commander.

So, our precision-guided and modern missiles are to be used against terror and crime; we have never built missiles for aggression, and will never do so.

What we want is brotherhood, friendship and negotiation. We want the end of wars, the end of aggression, the end of supporting terrorism, and the end of sanctions. We favor living together, which is the message of our Revolution.

This is the message of our imam. We have been with this Revolution for 41 years, and we will always stand by it because it has brought us freedom, independence and national sovereignty and has set us on the path to ethics and peace.”