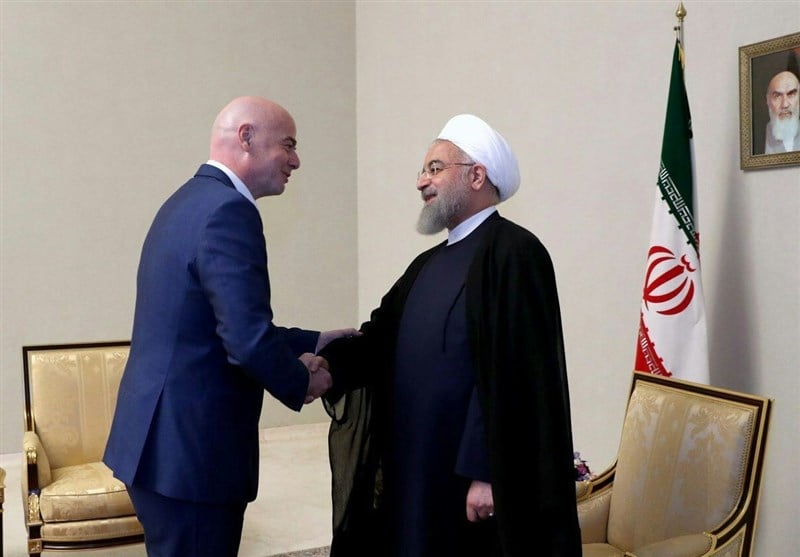 At the meeting held in the Iranian capital of Tehran on Thursday, President Rouhani pointed to the importance and role of sport, especially football, in vitality, health and close ties between nations, and said, “As the supreme international football institution, FIFA and regional federations must be careful not to let non-sports claims and issues affect sports.”

“Regarding the appeal of football for nations and especially young people, the FIFA can play a significant role in bringing nations closer together.”

“Fortunately, today the Iranian people, especially the younger generation, are very interested in sports and especially football, and sport events are followed by a lot of excitement, which you will see in the competition between the two most popular football clubs in the capital today,” Rouhani told Infantino, referring to Tehran derby between Esteghlal and Persepolis football clubs.

Stressing that the government of the Islamic Republic of Iran has always tried to provide more and more access to sport, he said, “Public and professional sport activities are increasing in our country today, and national teams of Iran take part in various fields of sport at global levels, including the presence of Iranian national football teams at all levels in regional and global competitions.”

According to official website of the president, Rouhani also referred to the passionate presence of women in various fields of sport, especially football, and said, “Today, Iranian women are present livelier in sport fields, including 23,000 women athletes in football.”

“Iran is a safe country and is ready to host regional and international sports and groups,” Rouhani underlined, pointing out that regional federations should seek to bring nations closer together and increase friendships.

The Iranian president also emphasized the need for FIFA to promote the rights of nations to watch their favorite teams in their stadiums and country.

Also at the meeting, the President of the Federation Internationale de Football Association (FIFA) Gianni Infantino expressed satisfaction over meeting with the President of the Islamic Republic of Iran, and said, “Football has an important social role worldwide, and the Iranian people are truly among the most passionate fans of football in the world.”

“FIFA is always looking to improve the world through sports and will not hesitate to help improve the level of football in Iran.”

Infantino also described the Iran national football team (also known as Team Melli) as powerful and said, “The people of Iran, like any other nation, have the right to cheer their team at their stadium, and we, as the international federation of football, will try to defend this right.”