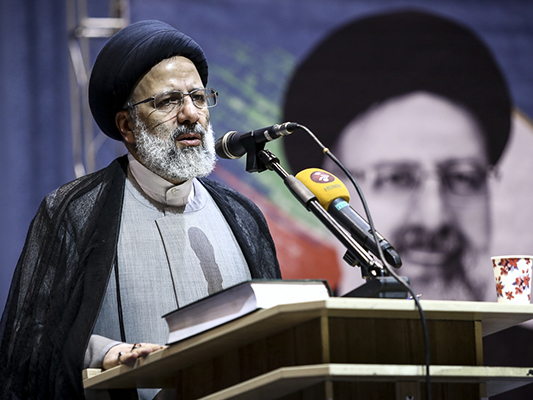 Iranian presidential candidate Ebrahim Raisi has sharply criticized the incumbent government’s performance, and said his decision to compete in the votes has not been taken on a whim, but to improve people’s living condition.

Raisi, one of the six candidates contesting Iran’s May 19 presidential election, has harshly blasted the Iranian President Hassan Rouhani’s administration for its failure to put in a convincing performance during its four-year term in office in a stump speech on Friday (May 12).

Raisi stressed that seeing the Iranian people’s poor living condition has been the main driving force behind his decision to run in the votes.

According to a report by IFP, addressing people in a stump speech in Varamin, south of Tehran, after participating in the third and final live election TV debate, he said, “I am very pleased to be among the fervent people of Varamin. The people who stood up for Imam Khomeini in 1963. The people whose present generation plays a more crucial role.”

The reason for his presence among the brave people of Varamin, he said, was to talk about certain issues that the more they are being discussed, the more people are realizing the truth behind them.

Raisi noted that the incumbent government’s wrong inclination towards expanding cooperation with foreigners and thinking of them as an effective factor in all of the country’s issues is quite visible and palpable.

He warned that a large number of countries suffered a sad fate due to maintaining the same attitude.

The candidate clarified that Iran’s missiles are not for launching a war, adding the country has armed itself with them to guarantee its security.

Raisi stressed that Iran has the missiles to prevent any act of aggression against its territory and people and display its defensive power to the enemies.

Commenting on people’s living condition and the country’s economy, he said anybody who pays a brief visit to Iranian counties will realize that their people do not receive the attention they deserve.

Raisi added a city like Varamin, which has played a significant role in the Victory of Iran’s 1979 Islamic Revolution, should not have been overlooked to the extent that one of its citizens complains about her husband having no job.

“[Currently] more than 17,000 workshops have been shut down in Iran. In case the statesmen had realized this, they should have done something about it. When we ask the owners of the workshops why they are no longer operating, they say because of a lack of liquidity.”

Reason for Running in Vote

“I had a job. My decision to run in the election has not been taken on a whim. However, when I witnessed people’s poor living condition, I felt responsible [to improve it]. During the past 38 years, we never turned a blind eye to those who were involved in corruption. When you [Hassan Rouhani – another presidential contender] say people came to support me by bus, you are insulting them […].”

Addressing the incumbent government, he questioned what the outcome of the nuclear deal between Iran and world powers was.

“A large number of foreign delegations travelled to the country, but, last year (ended mid-March 2017), foreign investment stood at only $500 million. We, instead of counting more on our own youths, have pinned all our hope on assistance provided from outside the country.

“Why do you make accusations? What are you angry about? Are you mad at the miners? Or those who maintain that in the absence of embezzlement, people’s housing problem will be resolved?”

At present, Raisi said, there are 11 million youths in Iran who are ready to get married.

“This is while you [the government] disagreed to increase the marriage loan. Some 500,000 couples are in queue to receive marriage loan […].”

He said he and his administration will not dodge their responsibility, the same as many of the country’s great figures who refrained from evading theirs.

“We believe that the problems can be resolved. We are required to move in line with the [high aspirations of the] Islamic Revolution. The only way to achieve that is by putting our trust on God and having confidence in our youths and people.”