People Inside US May Avenge Soleimani’s Killing: Top General 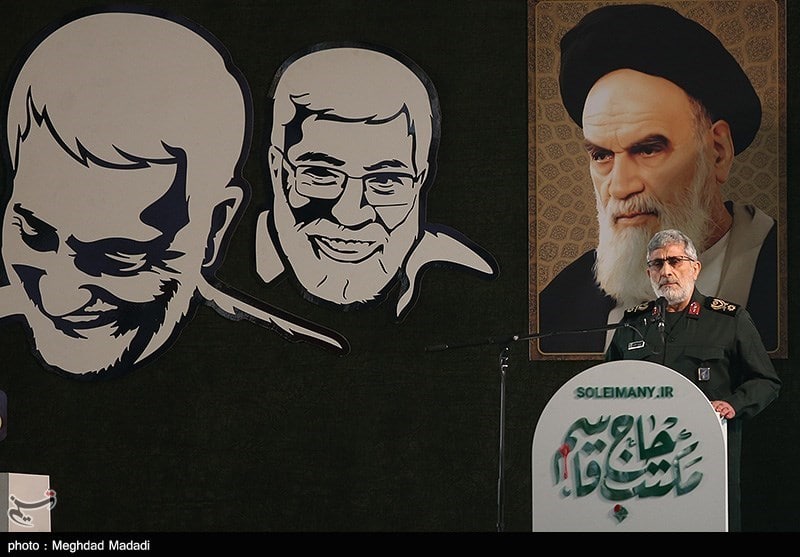 IRGC Quds Force Commander Esmaeil Qa'ani has warned that people inside the United States may retaliate the assassination of his predecessor General Qassem Soleimani.

Addressing a Friday ceremony to mark the first anniversary of General Soleimani’s assassination, General Qa’ani said “it is possible that some people inside your home (the US) would respond to your crime.”

He said after what the US did, they may find people all around the world who would be ready to take vengeance.

Qa’ani said the enemies of the Islamic Republic sought to target General Soleimani and Abu Mahdi al-Muhandis for thirty years, and finally the “filthiest man” was tempted by the Israeli regime and Saudi Arabia and made such an “unwise” move.

“The entire world will definitely condemn you. Those who committed this crime must know that all around the world, you may find a brave man who is ready to punish the cowards who did that,” he added.

General Soleimani, deputy commander of Iraq’s Popular Mobilization Units (PMU) Abu Mahdi al-Muhandis and a number of their comrades were killed in a January drone attack, ordered by US President Donald Trump, near Baghdad International Airport.

In his Friday remarks, General Qa’ani stressed that the US mischievous acts in the region will not change the Resistance Front’s path.

Earlier in the day, Iran’s Foreign Minister Mohammad Javad Zarif had warned about the US “acts of mischief” in a phone conversation with the Kuwaiti foreign minister.