Nuclear deal, a first step toward settlement of other problems 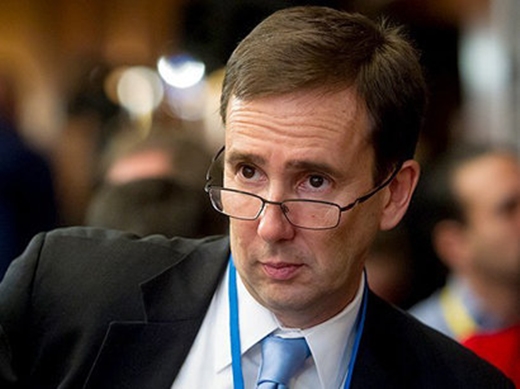 Alan Eyre says conclusion of a comprehensive deal at nuclear talks is a tough job. If it had been easy, a settlement would have been reached already.

The ongoing nuclear talks between Tehran and P5+1and whether or not a final comprehensive deal is clinched by the July 2015 deadline are an issue of paramount importance in Iran. The Iranian media usually resort to different sources to expand on the prospects of the talks.

On January 17, Arman-e Emrooz, a reformist daily, published a brief interview with Alan Eyre, a Persian-speaking US State Department diplomat, who speaks on the record for the American administration. Here is the translation of the interview on Iran’s nuclear program and where the White House stands on the talks:

Why did Geneva talks fail to produce results?

It’s too early to pass final judgment on it. It’s no secret that conclusion of a comprehensive deal at the talks is a tough job. If it had been easy, a settlement would have been reached already. God willing, we can reach an agreement through goodwill and perseverance. Our top diplomats and negotiating teams are expected to meet to see how they can take steps toward this goal.

Some blame Saudi Arabia for preventing the conclusion of an agreement. What’s your take on that?

I think it is not true. The fact of the matter is that the entire international community, Saudi Arabia included, wants to see these talks result in a comprehensive agreement to ease concerns about the nature of Iran’s nuclear program.

How much has the US attitude toward Iran changed ever since the eleventh government came to power?

The Obama administration has always said that it seeks to solve Iran’s nuclear issue peacefully through diplomatic means. So the decision – soon after His Excellency Dr. Hojjatoleslam Rouhani took office as president – to pick up nuclear talks in earnest was promising. Apart from the nuclear question, we have other problems with Iran. If we manage to settle the nuclear issue through negotiations, this big step may lead to other steps to remove those problems.

How do you describe the talks held recently?

This round of talks was held in a good atmosphere. The two sides are expected to take part in the talks with goodwill.

What do you think about the results of the talks?

The results are not predictable at all. As always, the talks are being held in an atmosphere filled with earnestness, goodwill and mutual respect. Over the past year, we have made a lot of progress in the talks. We should not overlook such progress or underestimate it.

Clinching a final deal acceptable to both sides is certainly achievable. We try every possibility to arrive at an agreement. We have to wait and see if our efforts are enough. God willing, efforts by all parties [involved in the talks] will be enough so that the conclusiveness [of the talks] could both remove the grave and legitimate concerns of the international community about Iran’s nuclear program and lift the nuclear sanctions imposed on Iran’s economy.

How did the meeting between Messrs. Kerry and Zarif and their 15-minute walk affect the nuclear talks?

Recently the US secretary of state and Iran’s foreign minister met in Geneva and took a walk for a few minutes. Prior to the meeting, US Secretary of State John Kerry had said that the meeting in Geneva would be aimed at setting the stage for the talks on Iran’s nuclear program and helping secure more progress in the talks.

The US secretary of state believed all plans had to be assessed. Mr. Kerry stressed that the plans of the negotiating teams should be specified so that the settlement of these questions could pave the way for the conclusion of a final agreement.

Do you have any interest in traveling to Iran?

Definitely! I have liked Iran for years. I wish to travel to Iran one day so that I can see its beauties for myself. If that ever happens, I will improve my Farsi and can speak much better than this, God willing!