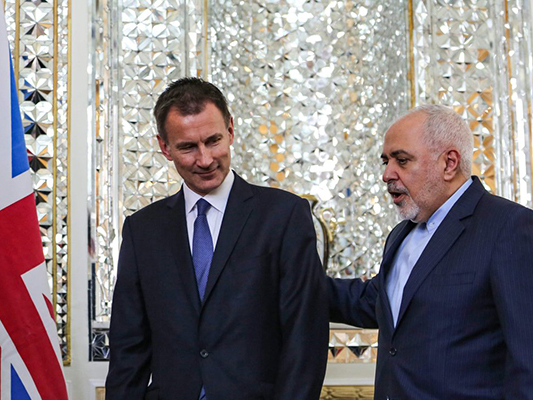 Iranian Foreign Minister Mohammad Javad Zarif has made it clear for his UK counterpart that Tehran will keep on exporting oil under any conditions, urging London to secure the release of Iran’s oil tanker as soon as possible.

In a telephone conversation with UK Foreign Secretary Jeremy Hunt on Saturday, Zarif reiterated that Iranian supertanker Grace 1 has been unlawfully seized by the UK in the international waters off the coasts of Gibraltar.

Highlighting the illegality of the US oil sanctions, Zarif said, “The Islamic Republic of Iran will keep exporting oil under any circumstances.”

Grace 1 was bound for a legal destination in eastern parts of the Mediterranean, the top Iranian diplomat underscored.

“The European Union, which has always opposed the extraterritorial imposition of US sanctions, cannot take such measure itself, and the UK government must immediately make the necessary arrangements to end the illegal confiscation of the Iranian oil tanker,” Zarif added.

He further touched upon the case of Nazanin Zaghari and the other dual nationals detained in Iran on charges of violating national security, stressing, “The arrest and trial of these individuals have been in accordance with completely legal processes, and the UK government is expected to respect the enforcement of law and the independence of the Judiciary in the Islamic Republic of Iran.”

For his part, the British foreign secretary emphasized Iran’s right to the export of oil, but voiced concern about the escalation of tensions in the region.

Hunt also hoped that that the outcome of the legal and judicial investigations in Gibraltar would result in the immediate release of Grace 1 carrying Iranian oil.

The Iranian supertanker was boarded and impounded by Gibraltar police and customs agencies, aided by a detachment of British Royal Marines, on July 4 at the US request in the Strait of Gibraltar.