No More Reliance on Foreigners after Nuclear Deal: Iran Leader

The Leader of Iran’s Islamic Revolution Ayatollah Seyyed Ali Khamenei says the country will no longer rely on any foreign power after the lessons it learnt in the course of nuclear negotiations with the P5+1.

Speaking in a Sunday meeting with a group of Iranian people from East Azarbaijan province in Tehran, the Leader urged the country’s officials to avoid relying on foreigners in developing Iran’s economy.

“Prosperity of domestic economy needs good exports, import of goods as much as required, and attracting foreign investment, but Iranian managers must be in charge, and foreigners should not be relied upon in this regard.”

The Leader pointed to the “economic earthquake” and “very heavy blow” that struck certain developed countries in Eastern Asia a decade ago, and described it as a great lesson for Iran.

“The blow took these countries to poverty and misery overnight, and that was a result of relying on foreign investment,” he added.

Ayatollah Khamenei also noted that the Islamic Republic did not gain anything by trusting foreign powers in the case of the nuclear deal and the negotiations that led to the finalization of the JCPOA.

“We witnessed the result of relying on foreigners in the case of JCPOA, and achieved nothing from trusting them in nuclear negotiations.”

“However, our officials are fortunately dealing with the issue well, and our foreign minister, to whom I am grateful, is adopting very good and strong approach to the deceits of Americans and Europeans,” he noted, adding that such approach must be continued.

“We must take advantage of the foreigners, but we should not trust and rely on them, because they would dominate the country’s fate through different ways,” he added. 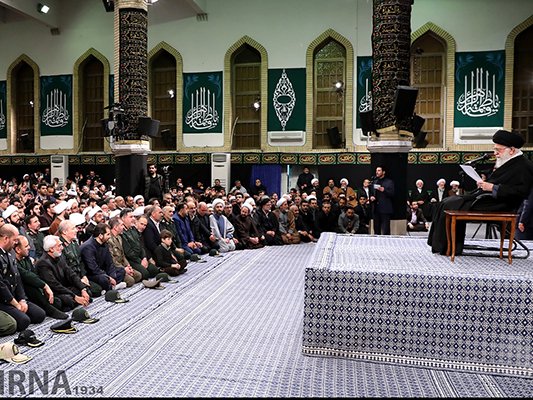 Promotion of Defence Power Necessary Even If Entire World Disagrees

The Leader further pointed to the renovation of the country’s defence power, and said the enhancement of all methods, instruments, and equipment needed for defending the country today and tomorrow must be given priority.

“Without even a moment of hesitation, the country must move towards anything it needs for defence, even if the entire world is opposed,” he added.

Ayatollah Khamenei strongly criticized the enemies who threaten the human kind using their warfare, but express opposition to the country’s missile defence power.

“It is none of your business. You want the Iranian nation not to have any missile and defence equipment so that you could bully it,” he added, addressing the enemies.

“We believe nuclear bombs and Weapons of Mass Destruction are haram [prohibited based on Islamic teachings], but we will strongly pursue acquiring whatever we would need,” the Leader noted.