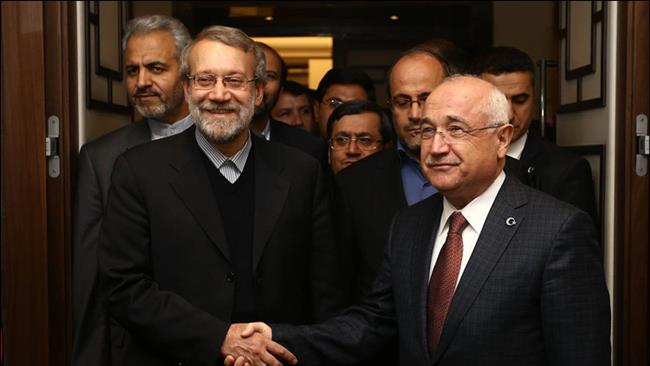 The top MP said the status quo in Syria is not in the interest of any country, calling for political efforts to restore stability to the conflict-stricken country.

Iran’s parliament (Majlis) Speaker Ali Larijani has called for unity among Muslim countries in the face of Israeli aggression.

“The Zionist regime’s interference in Syria is a significant sign that they (Israelis) plan to pressure Muslims countries through conspiracy,” Larijani, who is on an official visit to Turkey, said in a meeting with his Turkish counterpart, Cemil Çiçek, in Istanbul on Tuesday.

On Sunday, an Israeli military helicopter fired two missiles at Amal Farms in the strategic southwestern Syrian city of Quneitra, close to line separating the Syrian part of the Golan Heights from the Israeli-occupied sector.

“Therefore, Muslim countries must unite in the face of incursions by the Zionist regime [of Israel] like the recent terrorist attack [on Syria] by this fake regime,” Larijani added.

Referring to the ongoing crisis in Syria, the top MP said the status quo in Syria is not in the interest of any country, calling for political efforts to restore stability to the conflict-stricken country.

Larijani also touched on ties between Tehran and Ankara, calling for the promotion of relations between the two countries.

Regarding the publication of blasphemous cartoons of Prophet Muhammad by French satirical magazine Charlie Hebdo, he said, “An issue that has hurt the feelings of Muslims is the offense against the Prophet Muhammad (PBUH), which has been committed in the Western countries.”

The Turkish speaker, for his part, pointed to the upcoming session of the Parliamentary Union of the Organization of Islamic Cooperation (PUOIC), and expressed hope that the problems of Muslim countries will be addressed and a telling answer will be given to the recent insults at the holy Prophet.

Çiçek also noted that foreign intervention will fail to settle the crises in the Middle East.

The Western countries aim to exploit the trivial differences among Muslims, the Turkish speaker stressed.