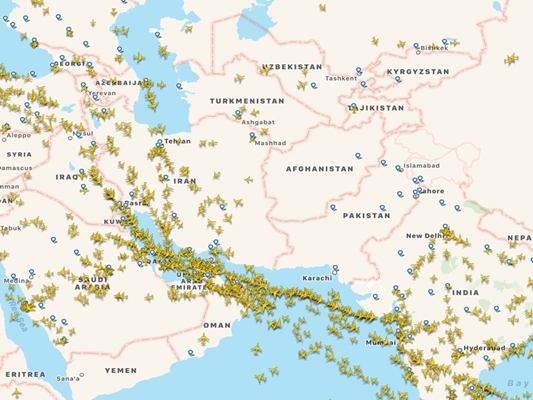 The number of planes flying over the Iranian airspace has significantly increased amid the growing military conflict between India and Pakistan.

Amid growing tensions between the two Asian neighbours and the closure of Pakistani airspace, Iran is witnessing a dramatic growth in the number of planes using its sky.

Following the closures of air corridors between India and Pakistan amid the growing tension between the two states, many airliners from various countries are rerouting their flights and using Iran’s airspace due to its security and safety.

Four Pakistani airports were beginning partial operations on Friday and they will fully resume commercial flights on Monday, the Civil Aviation Authority said, after airports were closed when military tensions with India erupted earlier this week.

Karachi, Islamabad, Peshawar and Quetta airports were resuming some flights on Friday, with the remainder opening next week, a spokeswoman said.

The airspace closure disrupted not just Pakistan’s air transport but flights worldwide as airlines were forced to cancel or reroute flights to other destinations that pass over Pakistan.

This is not the first time that Iran’s airspace is being used by regional flights. During the unrest in Ukraine and Iraq, foreign airliners changed their routes to pass through Iran’s sky.

Also following the decision by Saudi Arabia and its allies to impose a blockade on Qatar, most of the country’s flights were made through Iran’s airspace.

At present, Iran is one of the main corridors for flights from east to west and north to south. Experts maintain that the government of Iran can take advantage of the new capacity to reduce its reliance on oil revenues.