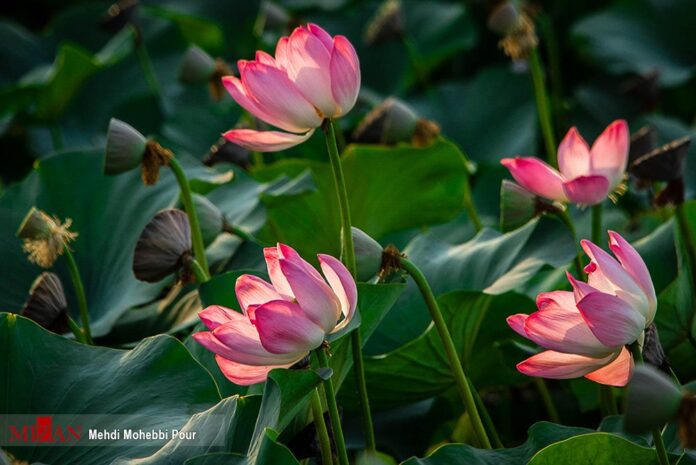 The northern Iranian province of Mazandaran is home to beautiful lagoons, the surface of which is decorated with a large number of lotuses. They provide visitors with spectacular scenery during summer.

The lotus lagoons in Mazandaran Province are among the tourist attractions of the northern Iranian province of Mazandaran which provide visitors with spectacular scenery in summer.

The lagoons are mostly located in Rokan Kola village in Simorgh County and Hamid-Abad village, in Sari, the provincial capital of Mazandaran.

Indian lotus, or simply lotus, is a species of aquatic plants the seeds of which are edible. The seeds can be consumed raw or dry roasted. They are so delicious that make anyone who tastes them for the first time praise their flavour.

The history of this aquatic perennial plant, which is scientifically known as Nelumbo nucifera, goes back to Egypt. The plant was first spotted in the North African country and, thence, was taken to Phoenicia, Assur and Iran to be cultivated in these countries. Although, at present, the plant has become scarce in Africa, it is still grown in aquatic gardens in South Asia and Australia. It is also the national flower of India, and Vietnam. 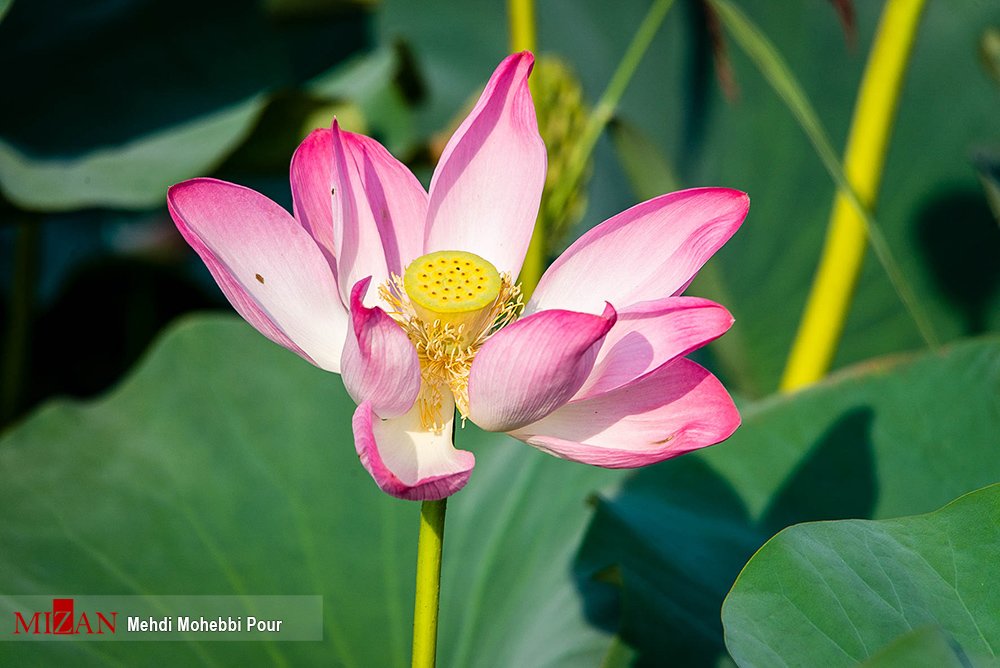 The plant has taken on religious aspects due to the water medium in which it is cultivated.

The growth of its pure beauty from the mud and sludge of its origin holds a benign spiritual promise. Since the flowers of the plant open concurrent with the sunrise, the blooming of the flower is likened to religious flourishing.

The roots of the lotus are planted in the soil of the pond or river bottom, while the leaves float on top of the water surface or are held well above it. The flowers are usually found on thick stems rising several centimetres above the leaves. The plant normally grows up to a height of about 150 centimetres and a horizontal spread of up to 3 meters, but some unverified reports place the height as high as over 5 meters.

There are different types of the plant the flowers of which vary in colour. Some of them are white, some are yellow and the rest are tinted with different shades of pink. 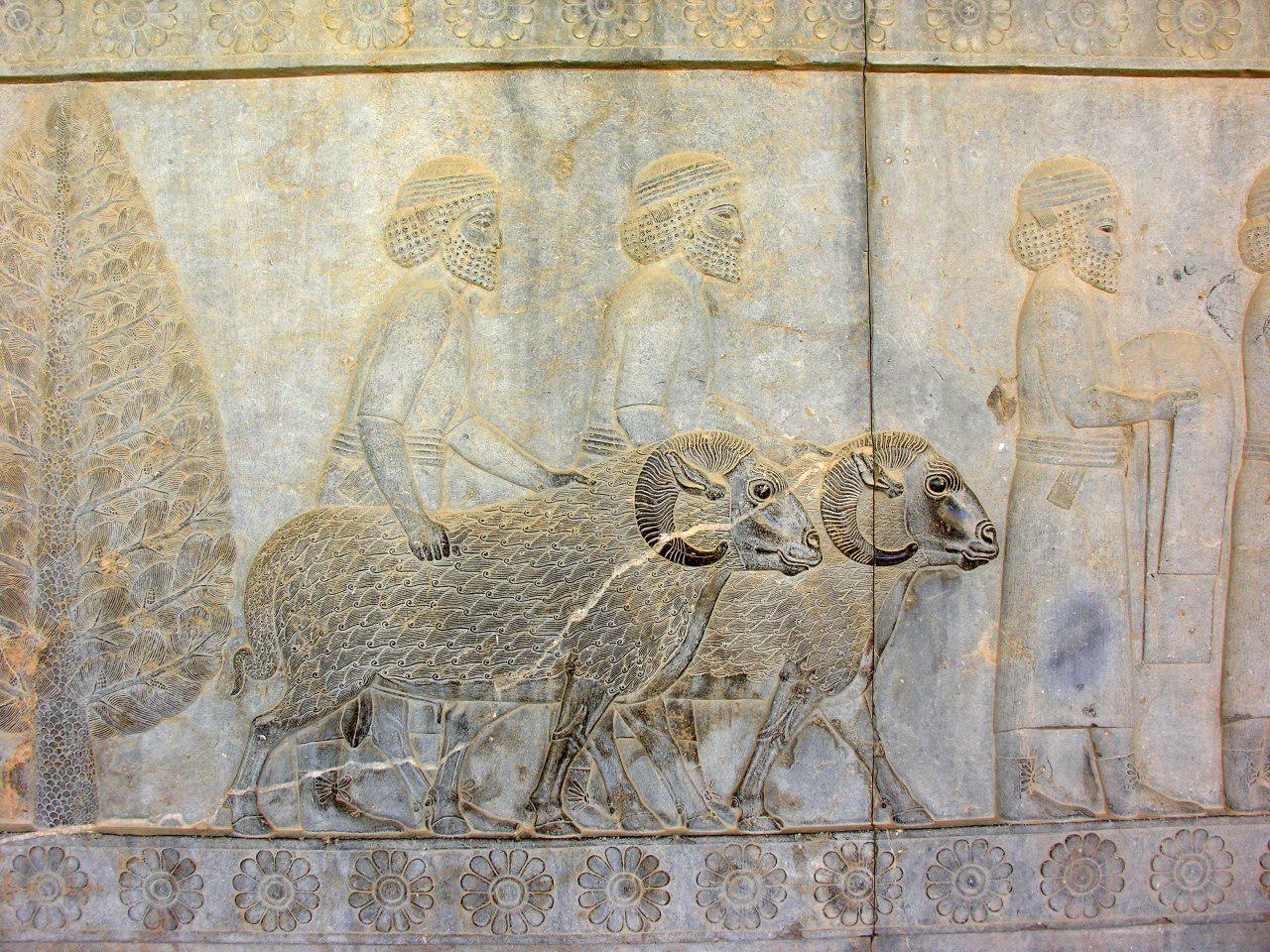 The plant has a special status in the Iranian culture. Designs similar to the shape of the plant have been etched on the walls of Persepolis in the southwestern province of Fars and Taq Bostan – a site with a series of large rock reliefs from the era of Sassanid Empire of Iran (226 to 650 AD) – in the western province of Kermanshah. The plant used to symbolize peace and happiness in ancient Persia. 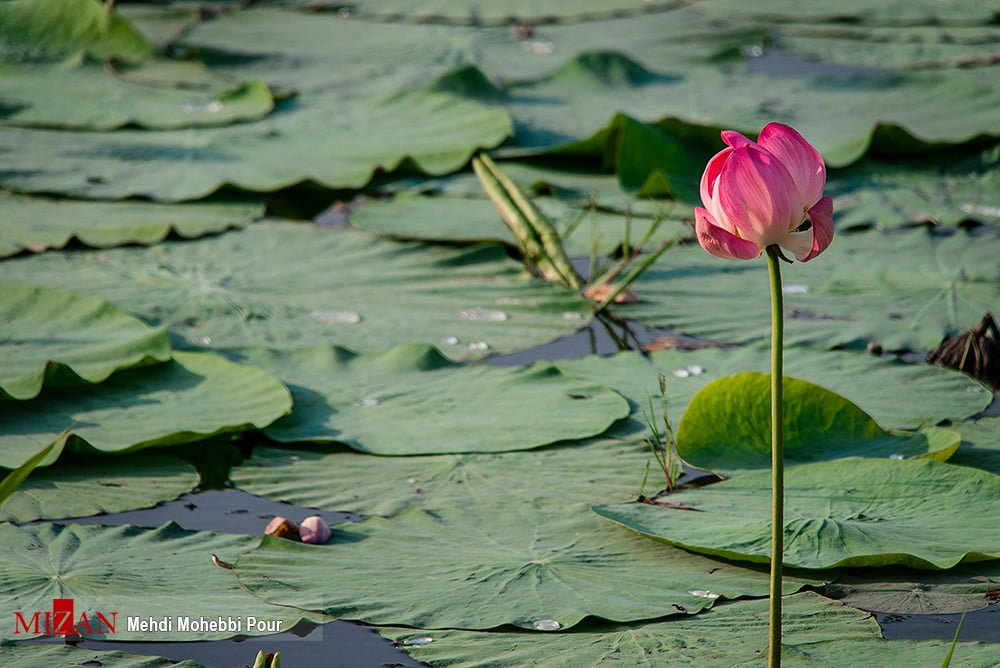 The lifespan of the lotus is only three days. On the first day, the bud of the plant is white. On the second day it becomes light pink. And on the third day, the flower blooms and reaches its peak in beauty. Being dark pink in colour, it does not close for a while.

The beautiful scenery created by the lotuses in the lagoons in Rokan Kola village in summer, can astonish nature-lovers and photographers.

During July 23-September 22, the flowers open and the lagoons are most beautiful. During this time-span, a large number of pink flowers with round green leaves are scattered over an area of 35 hectares on the surface of lagoons. This scene makes any visitor absolutely jubilant. 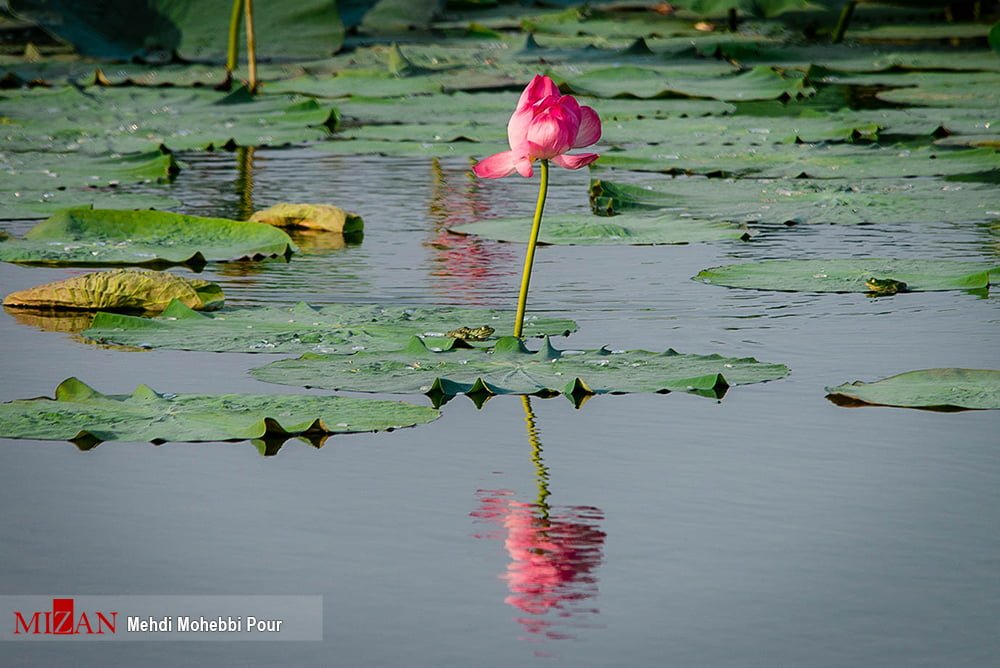 The plant also grows in Anzali Lagoon in the northern Iranian province of Gilan. However, in Mazandaran province, it only grows in Hamid-Abad village and Rokan Kola village.

In addition to its seeds, the plant’s flowers, young leaves and “roots” (rhizomes) are also edible. The lotus roots have been found to be rich in dietary fibre, vitamin C, potassium, thiamine, riboflavin, vitamin B6, phosphorus, copper and manganese, while very low in saturated fat.

The properties and benefits of the lotus have become a threat to its life. Some local people pull out the seeds of the plant and sell them. A number of people pick the flower of the plant to ornament bridal cars. These people are ignorant of the fact that their move can bring the plant to the edge of extinction and deprive them of the opportunity to see the beautiful flowers forever.

Although the lotus is a rare species, it can be cultivated and proliferated and turn into a source of income. The plant, which grows naturally in certain places of Iran’s northern provinces, has already created 200 jobs in Rokan Kola village and generated an annual income of over $17,000 for its people.

A number of the Simorgh County’s professional photographers have teamed up to capture the beauties of the region on their camera and present the photos to foreign tourists and investors in the form of an album. 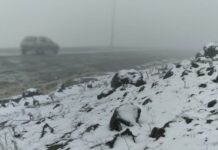