A look at Iranian newspaper front pages on Oct. 8

Remarks by President Hassan Rouhani in a ceremony on Tuesday to ring in the new academic year in Iran made front page headlines in most of the Iranian newspapers on Wednesday October 8. Also a joint meeting between the Cabinet and parliament was under the spotlight in several newspapers.

Afkar: “Iran arrests more than 130 people who are linked with the Islamic State of Iraq and the Levant (ISIL) militants.” 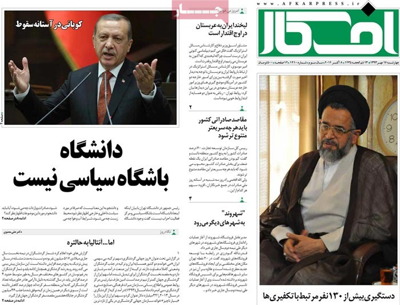 Aftab-e Yazd: “A group inside the government is obstructing Rouhani’s efforts and plans,” said Rasoul Montajabnia, a former MP and deputy head of National Trust, a reformist party, in an exclusive interview with the daily. 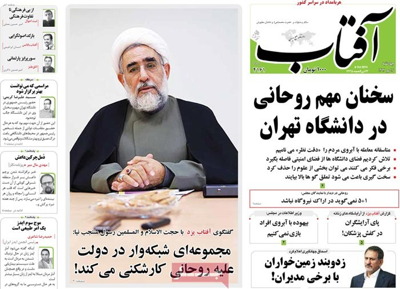 Arman-e Emrooz: “National unity is what we direly need,” said Ali Mottahari, a Tehran MP, in a letter to President Rouhani, disputing the government’s performance in some domestic areas and asking for more efforts for the implementation to the letter of the Constitution’s Chapter Three which deals with people’s rights. 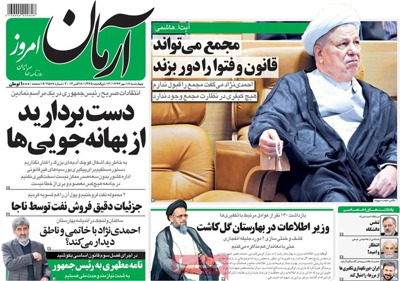 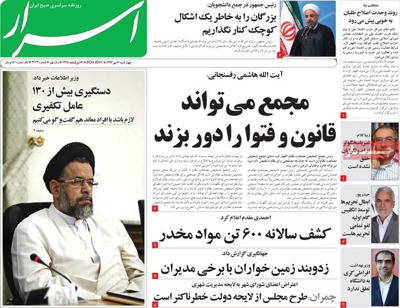 Ebtekar: “Details are out on the sale of crude oil by the police force.” The daily quotes the police chief as saying that the money from such sales has been transferred to the country’s coffers. 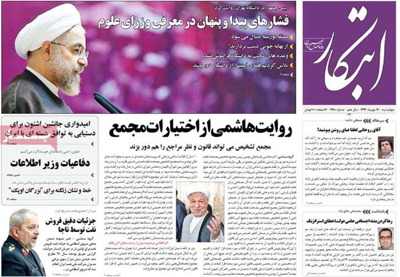 Eghtesad-e Pooya: “Iran has no intention to sell off oil.” 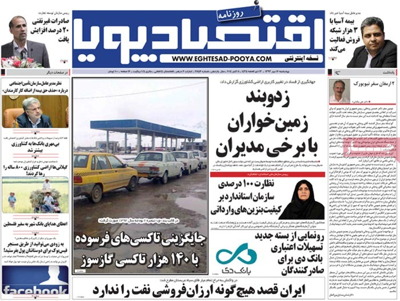 Etemad: “The government gives the green light to [the Central Bank of Iran’s] decision to drive down the interest rates.”

Etemad: “A train carrying European tourists has arrived in Tehran.”

Etemad: “Iran sees eye to eye with P5+1 on [uranium] enrichment, Arak and Fordow [Facilities],” President Rouhani told a joint meeting of the government and parliament. 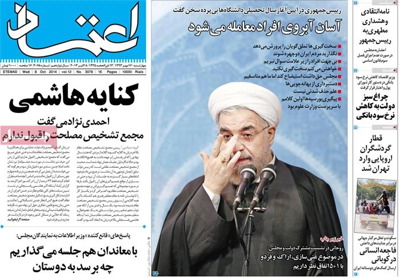 Ettela’at: “Scientific transformation becomes achievable if we remain open to criticism,” said President Rouhani, addressing students at the start of the academic year.

Ettela’at: “Iran climbs to the seventh spot in world rankings in terms of nanoscience production”. 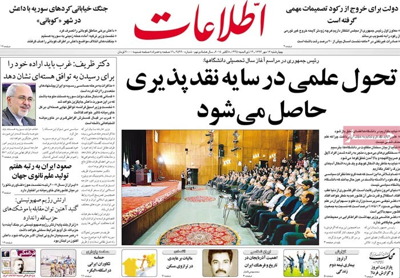 Farhikhtegan: “The Oil Ministry and the Islamic Azad University sign a deal to establish scientific and research-related cooperation to help accelerate the country’s march toward development.”

Farhikhtegan: “Expediency [Council] can skirt around the Constitution and the Sharia-based Fatwas,” said Chairman of the Expediency Council Ayatollah Akbar Hashemi Rafsanjani, adding that the council can even overlook the viewpoints of the Guardian Council if it deems it expedient. 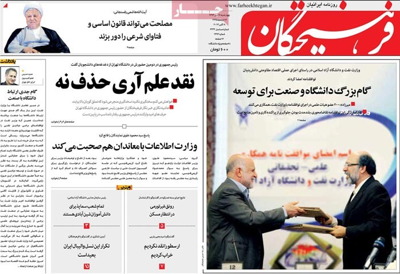 Hambastegi: “Extremism finds no room for maneuver in a scientific atmosphere,” said the health minister.

Hambastegi: “Traffic congestion [in the capital] has put the health of citizens in danger,” said the deputy Tehran Mayor. 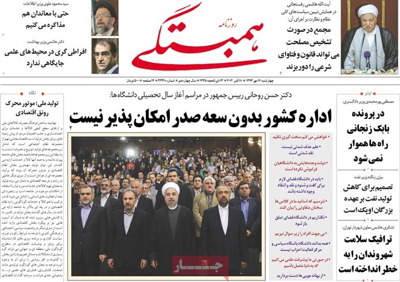 Hemayat: “The Americans are not after solving problems in nuclear talks,” Foreign Minister Zarif said in the parliament’s National Security and Foreign Policy Committee. 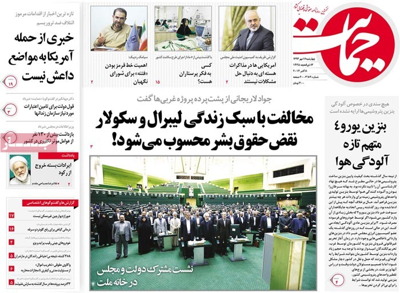 Iran: “Iran’s pensioners will see a 50 percent rise in their monthly pensions by March 2015”. 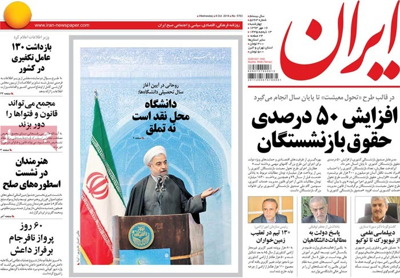 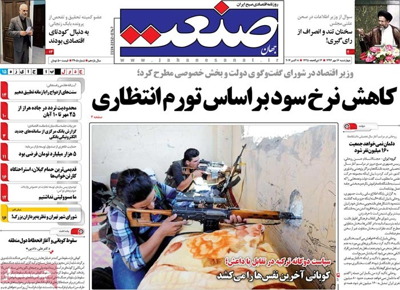 Kaenat: “A rise in the number of HIV-infected drug users.”

Kaenat: “Iran warns of a humanitarian catastrophe in Kobani, Syria”. 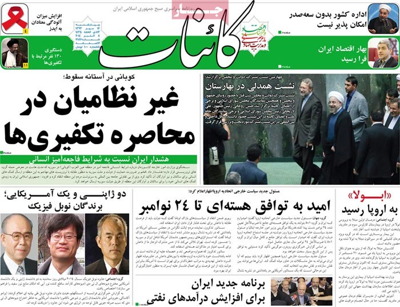 Mardomsalari: “Ahmadinejad did not believe in the Expediency Council and the 20-year Outlook Plan,” said Ayatollah Hashemi Rafsanjani. 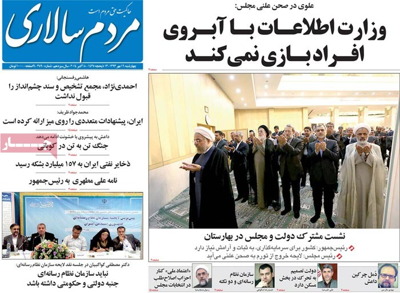 Nasl-e Farda: “Let us allow people speak out. […] Do not be afraid of different views. […] Do not take tough lines, please,” said President Rouhani [in remarks aimed at fellow officials].

Nasl-e Farda: “The bid to segregate sexes has found its way to the police force,” is the daily’s pick for its front page, announcing plans to launch all-woman police stations. 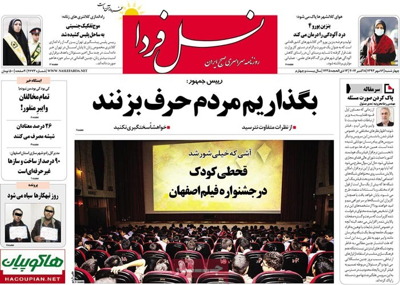 Qods: “The government will cede the economy to the private sector,” said President Rouhani. 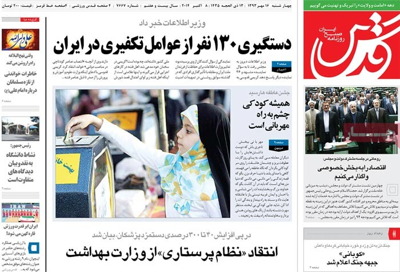 Roozan: “Ahmadinejad prepares to run for the tenth parliament,” wrote the daily, saying the former president seeks to return to politics. 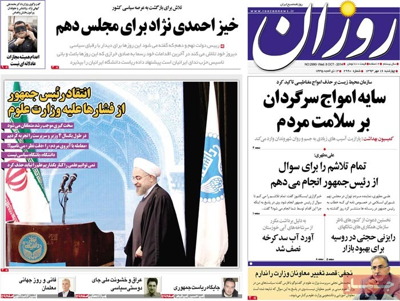 Shahrvand: “European insurance companies move to cooperate with Iran,” writes the daily, saying sanctions imposed on Iran’s insurance industry are being phased out. 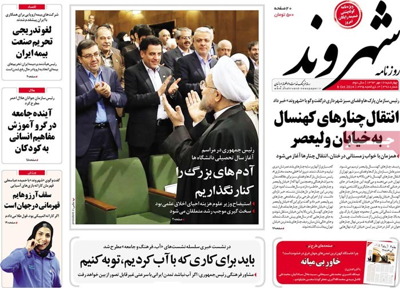