A look at Iranian newspaper front pages on Nov. 27

Parliament’s vote of confidence to Mohammad Farhadi as science minister dominated the front pages of Iranian newspapers on Thursday. Also among front-page headlines was the spillover of protests to other American cities following the decision of a grand jury in Ferguson, Missouri not to indict a white police officer for fatally shooting an unarmed black teenager in August.

Abrar: America has extended the suspension of its sanctions against Iran.

Abrar: “Those who have illegally received scholarships should be dealt with,” an MP said during the confirmation hearing of Mohammad Farhadi, the new science minister. 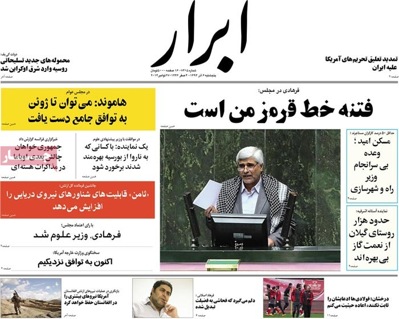 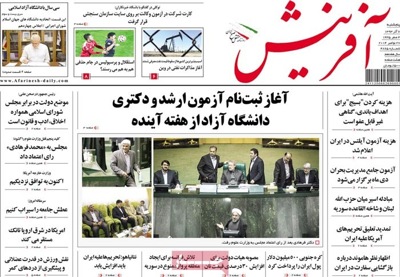 Afkar: President Rouhani has hailed the performance of the Iranian nuclear negotiating team. Arman-e Emrooz: Ali Motahari, [a principlist MP who supported President Rouhani’s nominees for science minister] has come under a barrage of attacks by fellow principlists in the chamber. Asrar: “We all have to turn out for [upcoming parliamentary] elections,” said former President Mohammad Khatami. 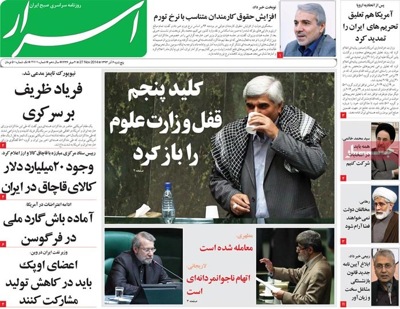 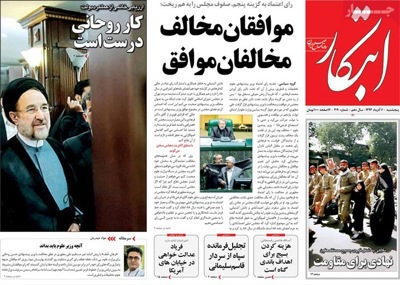 Emtiaz: Sami Yusuf, an Iranian-born British singer-songwriter, is to perform onstage in Iran.

Emtiaz: “The value of smuggled items in Iran stands at $20 billion annually,” said the director of the Headquarters to Fight Smuggling in Goods and Currency. 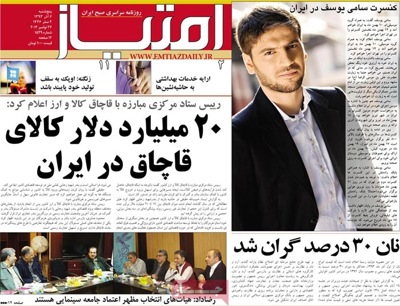 Esfahan Emrooz has described the confirmation of President Rouhani’s pick for science minister as “reconciliation between government and parliament”. 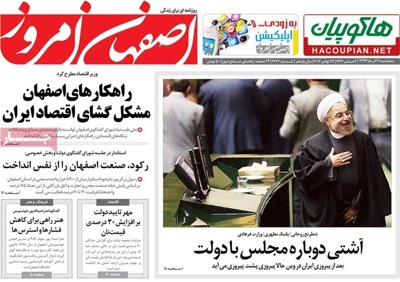 Etemad: As many as 70 French automotive managers will soon pay a visit to Iran. Ettela’at: The government spokesman said the pay rise of civil servants will be proportionate to inflation next year.

Ettela’at: European giants are in line to make it to the Iranian stock market. 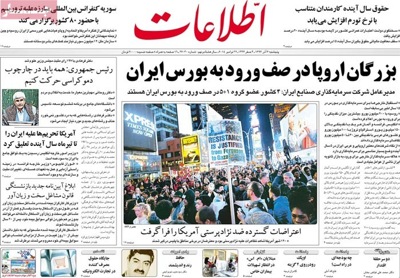 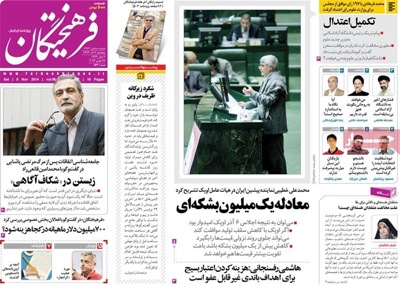 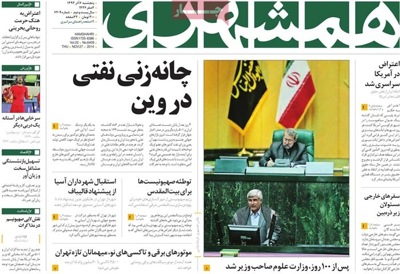 Hemayat: “The bullying attitude of the United States is to blame for the failure [of Iranian and P5+1 negotiators] to strike a nuclear deal,” said Judiciary Chief Ayatollah Sadegh Amoli Larijani. 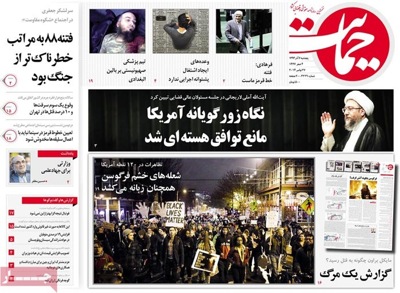 Iran: As many as 15 million people who live on the edges of major cities will benefit from the Healthcare Transformation Plan. 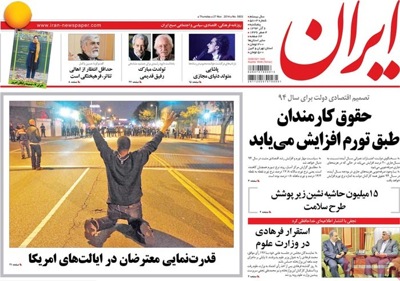 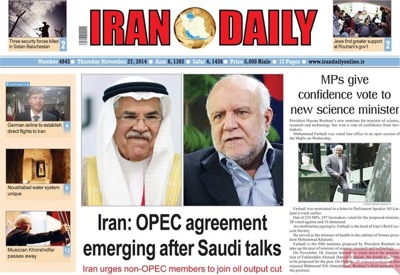 Javan: “Recent talks proved that the United States is not trustworthy,” said the commander of the Islamic Revolution Guard Corps. 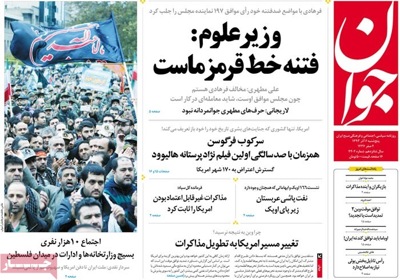 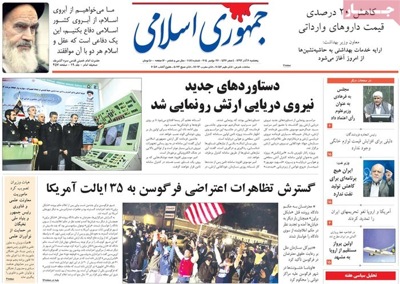 Kaenat: Three policemen on the beat have been killed in a terrorist attack in Zahak, a small town in the southeastern province of Sistan and Baluchestan. 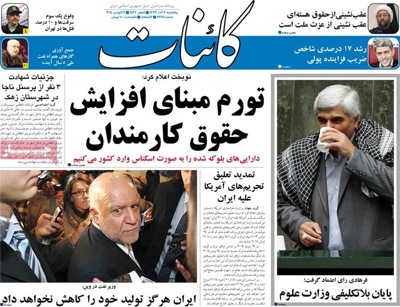 Kayhan: The Russian ambassador to Tehran has said in an exclusive, “Just like Iran, we view economic self-sufficiency as the way to counter sanctions.” Resalat: American people are protesting against racial discrimination from coast to coast. 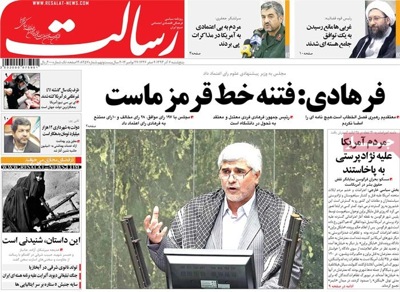 Roozan: [With the confirmation of Farhadi as science chief] Mohammad Ali Najafi, who served as acting minister since the impeachment of Faraji-Dana, released a memo to bid farewell to the staff at the Ministry of Science, Research and Technology. Shahrara: Sami Yusuf [an Iranian-born British singer-songwriter] says he will soon pay a pilgrimage visit to Mashhad [home to the shrine of Imam Reza (PBUH)]. 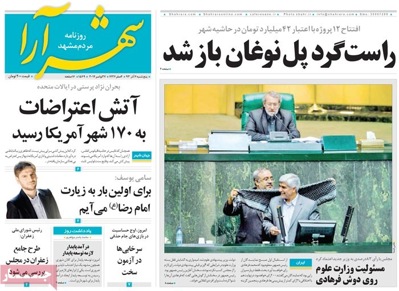 Shahrvand: A number of MPs have signed a motion that calls for the death penalty for those convicted of staging acid attacks. 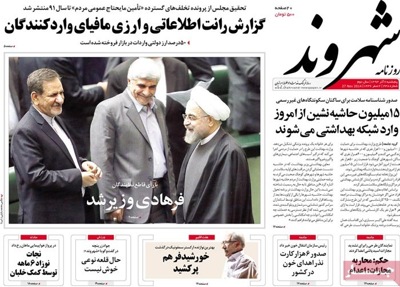