A look at Iranian newspaper front pages on Dec. 6

The news of ongoing rallies across America in protest against the decision of a grand jury not to indict a white New York police officer over the death of Eric Garner, an unarmed black man who was strangled to death after being placed in a chokehold, was splashed across many Iranian dailies on Saturday. On the national front, a visit by Parliament Speaker Ali Larijani to Pakistan and his remarks about regional security in meetings with Pakistani officials, including President Mamnoon Hussain, also came under the spotlight of newspapers.

Abrar: “Iran does not have any problem with the reopening of the British embassy in Tehran,” said a member of parliament’s National Security and Foreign Policy Committee. 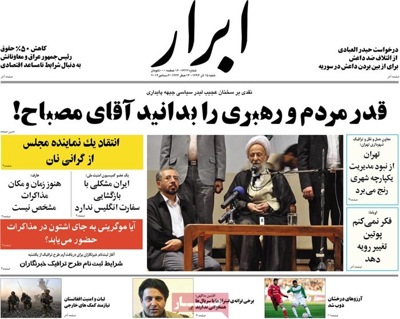 Afarinesh: “The makeup of American negotiating team will undergo some change; US Undersecretary of State Wendy Sherman has appeared in Congress in a bid to talk lawmakers out of slapping fresh sanctions on Iran. It comes as Congress seeks to bypass President Obama to impose new sanctions.” 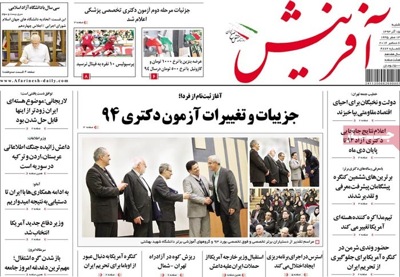 Afkar: “Shalamcheh border crossing on the Iran-Iraq border has been closed down as a result of a massive influx of pilgrims heading to the holy city of Karbala ahead of Arba’een [a Shiite Muslim religious observance that occurs 40 days after Ashura, which marks the martyrdom of the grandson of Prophet Muhammad] on December 13.” 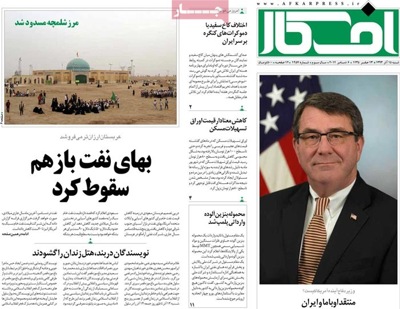 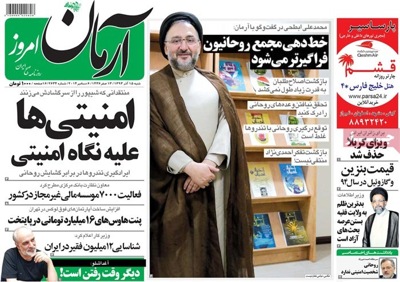 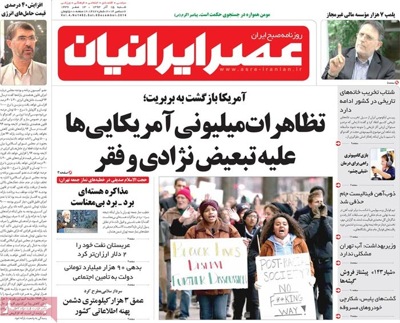 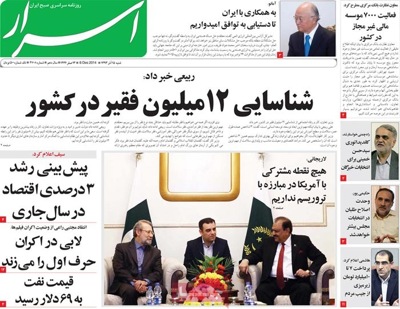 Ebtekar: “Suppressing the atmosphere of free discussion amounts to injustice to the Religious Jurisprudent,” said the intelligence minister.

Ebtekar: “There are 7,000 unauthorized monetary institutions in Iran.” 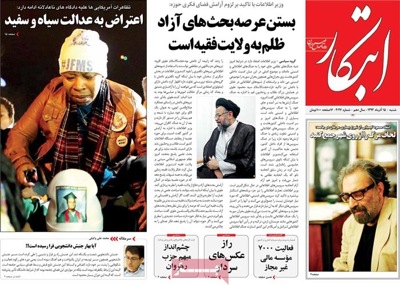 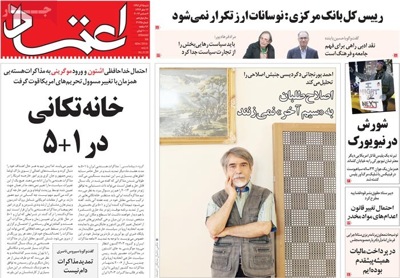 Ettela’at: “Pastor Andimeshk, Iran’s representative in the World Wrestling Clubs Cup – held in the southern city of Abadan (Dec. 4-5) – defeated Russia to secure the title in the Greco-Roman discipline.”

Ettela’at: “Efforts of prominent Iranian figures in the field of science and culture have been appreciated in the National Hakim Razi Congress.” 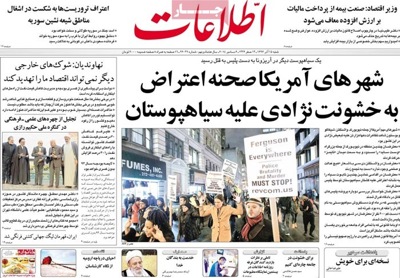 Hemayat: “Iranian pilgrims who wish to visit Karbala do not need a visa and are exempt from paying the toll charged before leaving the country.” 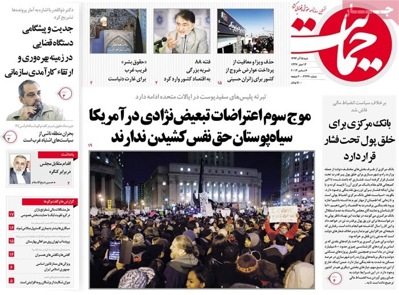 Iran: “The administration of schools will be delegated to the public,” said President Rouhani. 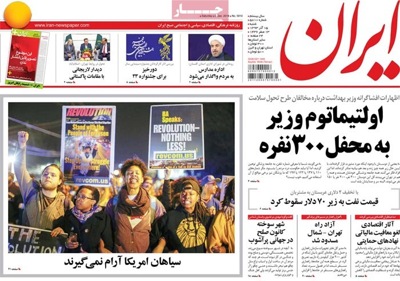 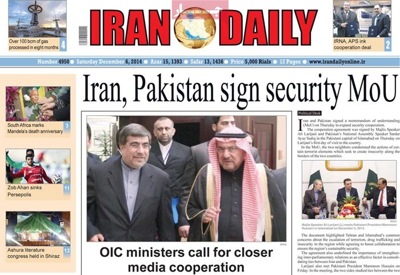 Javan: “Drones built by Iran’s Islamic Revolution Guard Corps can transmit live updates from as far away as 3,000 km.” 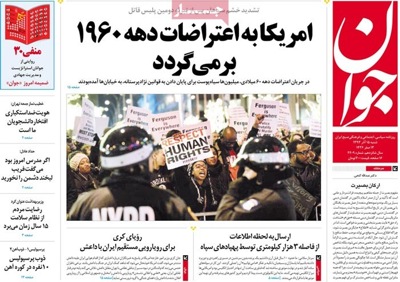 Jomhouri Islami: “The Management and Planning Organization has been officially reestablished.” 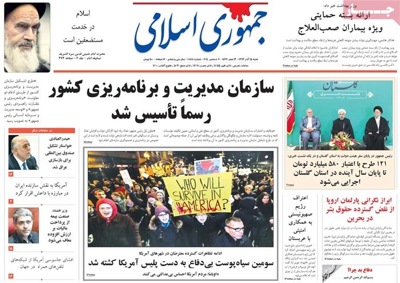 Kaenat: “A contract between Iran and foreign automakers has been finalized.” 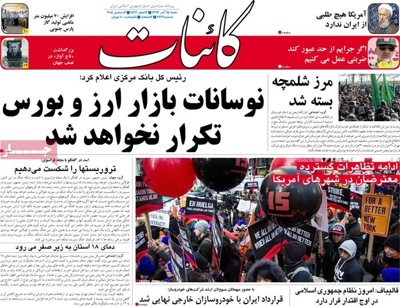 Kar va Kargar: “We should not allow outlaws to sabotage relations between the two countries,” Parliament Speaker Ali Larijani said at a meeting Friday with Pakistani President Mamnoon Hussain in Islamabad. 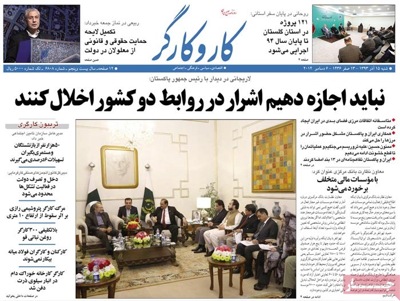 Kayhan: “We owe our national security to war veterans and those who lost their limbs [to serve our country], not to nuclear talks,” a number of MPs said in reaction to remarks by Foreign Minister Mohammad Javad Zarif.

Kayhan: “Things have turned tough for iconoclasts; Minister of Science, Research and Technology Mohammad Farhadi is loyal to the establishment.” 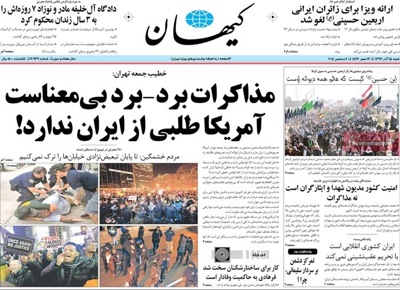 Qods: “Parliament Speaker Ali Larijani has dismissed reports that Iran is cooperating with America in air strikes against the ISIL positions.” 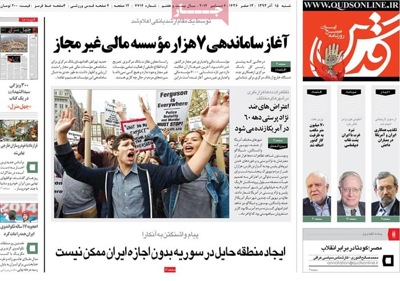 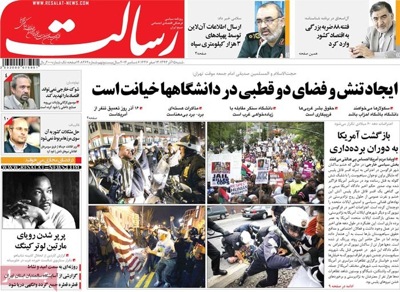 Roozan: “I am not going to put myself forward as a candidate for the upcoming presidential election,” said Seyyed Mohammad Sadegh Kharrazi, a member of the newly-formed NEDA [Farsi initials for a Second Generation of Reformism] Party. 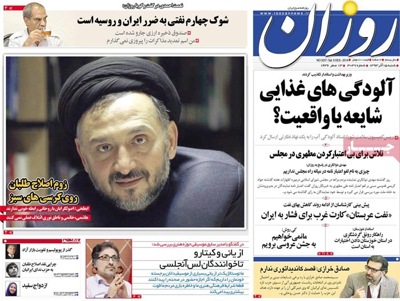 Vatan-e Emrooz: “Some MPs, experts and people are opposed to privatizing state-owned schools, citing its unconstitutionality.” 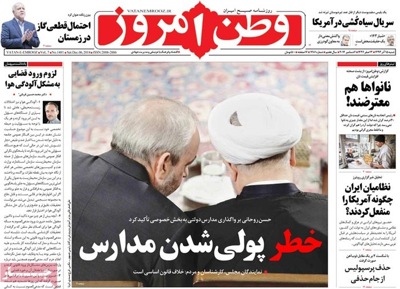