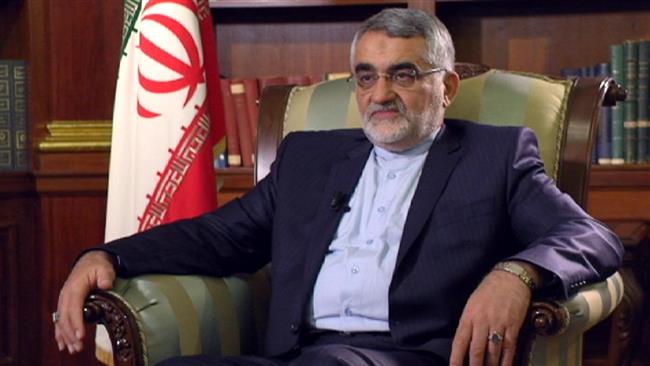 Boroujerdi expressed hope that London would take new strides in order to broaden the scope of cooperation between the two countries.

Chairman of parliament’s National Security and Foreign Policy Committee of Alaeddin Boroujerdi said on Tuesday that London should take concrete steps to promote cooperation with Tehran.

Boroujerdi made the remarks in a meeting with Director of Middle East at British Foreign Office Edward Oakden.

The current stands adopted by London and the economic sanctions orchestrated by the British government over the Iranian nuclear program do not help create a new chapter in relations, he said.

He expressed hope that London would take new strides in order to broaden scope of cooperation between the two countries.

The West has adopted double-standard policy in dealing with global issues as democracy, free elections and the fight against terrorism, he said.

Their negligence of the demand of public opinion in Bahrain and conduct of free election based on international norms and their inattention to the fight against terrorism will leave negative impacts on security and tranquility of the region and the world, Boroujerdi said.

Terrorism posed a potential threat to the security and development of all nations and adopting wrong policies will lead to the escalation of terrorism in the region, he said.

On Syrian developments, he said that refusal to take heed of the Syrian national sovereignty along with support for terrorist groups has created an unbearable situation in Syria which hurts humanity.

Edward Oakden, for his part, called for bolstering mutual relations as well as for a new chapter in Tehran-London ties.

“We are willing to open a new chapter on expansion of mutual relations,” he said.

He expressed hope that nuclear talks between Iran and P5+1 would bear fruit, saying that London will do its best to meet mutual interests.

He further added that London is quite serious in the fight against the IS terrorist group.