The Lavangi chicken is a palatable, traditional and major food of locals in the border town of Astara in Gilan province, northern Iran.

Among the main ingredients of the dish is “sweet medlar paste” and “sour plum paste” or “pomegranate paste” which, when combined, give the food a sweet-sour taste.

The food can be made with duck or fish as well.

Small Chicken: A whole one

Onions: up to 3 onions

Cinnamon: as much as needed

Sour Plum Paste: as much as needed

Sour Lemon: as much as needed

Wash and skin the chicken the night before and cover the whole chicken with sour plum paste. Fill the chicken with sliced sour lemon. Before cooking the chicken, grate the onions and put them onto the frying pan on low heat until its water evaporates.

Then crush the walnut and add it to the onions. Sauté the mix before turning off the oven. Add 2 to 3 spoonfuls of sour plum paste (depending on how sour the paste is) plus salt, pepper and cinnamon and mix them well until you get a smooth paste. Gut the chicken and rub some salt on the inside before filling it with prepared ingredients. 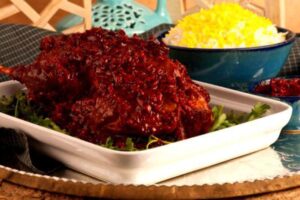 Then sew the chicken’s stomach with a needle and thread, and tie its feet together, so that the ingredients inside will not get out.

Put some oil in a dish and fry the chicken in it on low heat. Peel the potatoes and chop them before putting them onto the dish with chicken, allowing them to be cooked.

When the chicken is half-cooked, put it inside the oven at medium temperature and leave it there until it gets brown in colour and is cooked through. Then bring out the chicken and dish it out. 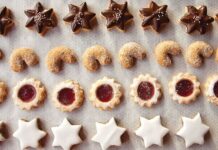