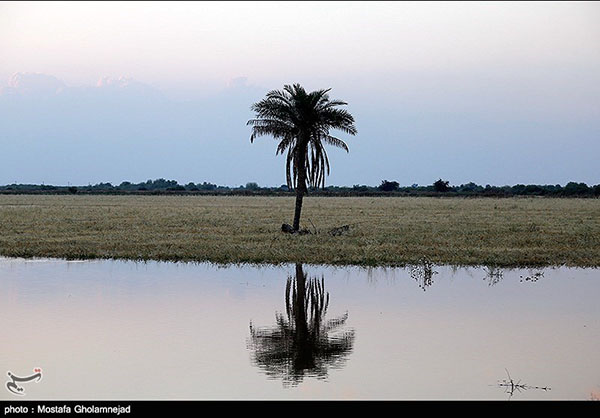 A closer look at Iran’s Khuzestan Province, widely known for its oil reserves, reveals oil is not the only resource of the province.

“Hunting and Nature” is a bimonthly that covers a variety of issues such as the environment, natural geography, hunting, game-keeping, conservation, and wildlife. Its 135th issue (April-June 2014) conducted an interview with Ahmad-Reza Lahijanzadeh, the director general of Provincial Environment Protection Department in Khuzestan, a southwestern Iranian province on the Persian Gulf; which has played a key role in the social, political, and economic life of the Iranians over the years.

We have picked part of the interviewwhere the environment chief talks about the climatic conditions of this mysterious expanse of land. Why mysterious? Because over the past century, it has been under the spotlight for two major reasons.

The first was the conflict that pitted the Iranian government against Western colonial powers, specifically Great Britain, over black gold – oil. It then resulted in the nationalization of the oil industry; and saw Mohammad Mosadegh’s government rise to power only to be toppled by the 1953 US-orchestrated coup – aka the 28 Mordad coup.

The second was the 8-year war between Saddam Hussein’s regime and Iran; which broke out following the 1980 invasion of Khuzestan and subsequent renaming of it by invaders. Khuzestan was finally taken back thanks to acts of bravery by the Iranian youth and selfless sacrifices of hundreds of thousands of soldiers; many of whom lost their lives or limbs to the war. What Khuzestan is like is one of the questions Lahijanzadeh has answered in the interview.

The human and natural environment of Khuzestan Province has some properties which are unknown to lots of people, particularly those who come from other parts of the country. On the surface, Khuzestan is an oil-rich region with a hot climate and barren deserts whose only considerable potential is oil, in reality though, our province enjoys special and at times unique features.

The province has a mountainous, plain-like and marine ecosystem

Khuzestan Province is about 64,000 square kilometers in area. One of its exclusive properties is that its northern and northeastern parts, which lie to the south of Central Zagros, are similar to the Zagros Mountains as far as ecosystem goes. The mountainous area abuts the Khuzestan Plain – a flat and fertile piece of land that stretches all the way to the sea.

That means the province has a mountainous, plain-like and marine ecosystem. The central ecosystem, the Khuzestan Plain, is irrigated by five large and permanent rivers, including the Karkheh River in the west of the province, the Dez River, the Karun River at the center, the Marun River, which is also known as Jarahi, and the Zohreh or Hendijan River in the east.

These five rivers have created their own alluvial ecosystems along their path in the region. Also, they have formed special deltas at their confluence with the Persian Gulf which in turn creates a habitat that can be seen only from the air.

During a 150-minute tour by helicopter of the region, Masoumeh Ebtekar, the head of Iran’s Environment Protection Organization, and I only managed to inspect part of the area. The vastness of the Shadegan and Hoor al-Azim Lagoons and their remarkable biodiversity make for some other unique climatic properties of Khuzestan Province.

Dense forests lying on the banks of the Karun and Dez rivers have now been designated as National Park. We are seeking to protect the forests around the Karun River, because in terms of habitat, they are really precious. For instance, the forests of Karkheh and Dez are the native habitat of yellow Asian deer. Their habitat used to stretch from Syria and Lebanon to Mesopotamia in the east and on to Karkheh and Dez.

However all those forests and deer in the neighboring countries vanished over past two centuries; to the point that the yellow Asian deer was declared extinct about five decades ago. Nevertheless, some confirmed sightings of the deer by locals were reported later in the region of Karkheh; which prompted a team of experts, including some environmentalists along with a number of German researchers to visit the region.

After extensive efforts, they managed to catch six deer alive and took them to Germany for reproduction; before releasing them in Naz Plain of Sari – a city in northern Iran. Therefore the deer was saved from extinction. A number of these animals were brought back to their native habitat, Karkheh, about seven years ago.