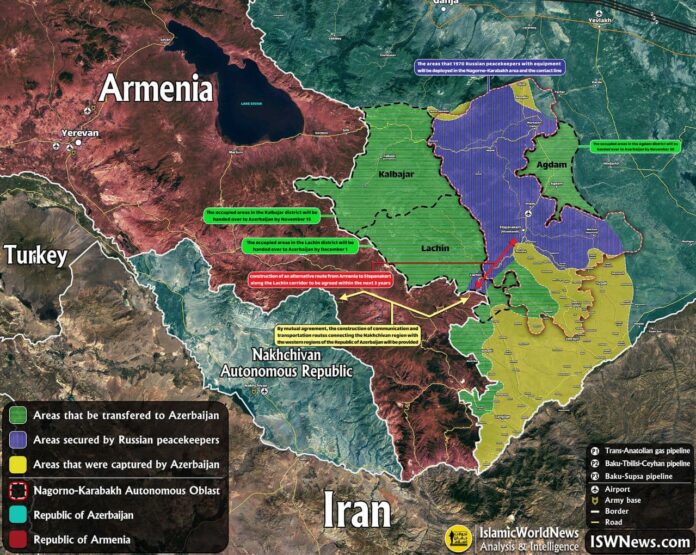 Iran has rejected rumours about the consequences of the ceasefire agreement between Armenia and the Azerbaijan Republic, saying no change will take place in the Iran’s transit routes toward either of the two countries.

“Unfortunately, wrong and misleading information coupled with fabricated maps are being spread in cyberspace. There have been claims such as the cutting off of Iran’s border with Armenia, the creation of a corridor inside Aremenia or even inside Iran, the change of the region’s geopolitics, etc., which are not basically true and have been made with specific political and propaganda objectives,” he said.

Araqchi then touched upon the main map of the agreement.

“As it can be seen in this map, the claim that a geographical strip is to be created next to Iran’s border with Armenia is totally groundless,” said Araqchi, the Iranian president’s special envoy who presented Iran’s Nagorno-Karabakh peace initiative.

“What is mentioned in the Karabakh ceasefire agreement is to create a road corridor, or let’s say a transit route, inside the Armenian territory which would extend from Nakhchivan toward the Azerbaijan Republic’s mainland and whose security will be guaranteed by Russia, and whose exact course is not yet clear,” he noted.

“This is not a new idea and was proposed long ago, and even if the plan is implemented, there will be so many ifs and buts. However, it will cause no change in Iran’s transit routes toward Armenia or the Azerbaijan Republic,” he said.

“Still, our consultations are going on with all sides. Just Wednesday afternoon, I had a lengthy discussion with the Russian ambassador to Tehran in this regard,” he added.