JCPOA waiting for a white vote out of a gray report 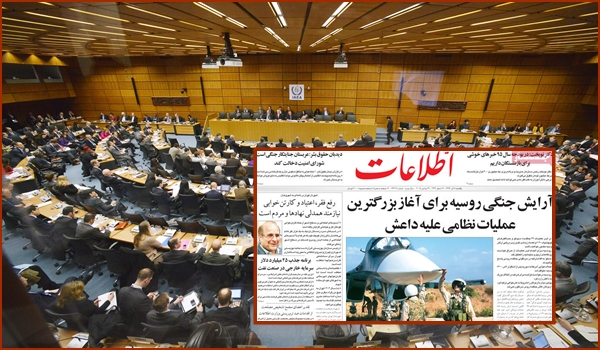 The report Amano is to release within days is only a first step. The next stage – a decision by the Board of Governors – is very important and sensitive.

Since the beginning of nuclear talks between Iran and P5+1, two main news and propaganda movements have been formed inside and outside Iran. One is optimistic and hopeful about a successful end and about the implementation of the [Iran nuclear] deal and eventual closing of the case.

The other media movement, however, turns the spotlight on negative aspects, for instance the possible breakdown of nuclear talks and the implementation of the Joint Comprehensive Plan of Action (JCPOA), and makes headlines out of them.

Ettela’at newspaper on November 29 published an editorial by Abolghasem Ghasemzadeh on the waiting hours before the Iran nuclear deal is implemented. The following is the translation of the editorial:

The second movement walks down the path of negativity in a bid to disseminate information. Such defeatism is [still] pursued by some news outlets at home and certain Western media and their regional peers in Arab countries and Israel.

Remarks by Director General of the International Atomic Energy Agency Yukiya Amano in a recent interview have resulted in a more heated confrontation between these two media movements in their positive and negative thinking.

In fact, what is now in the news is a waiting game which is played before the IAEA’s Board of Governors releases its final decision on Iran’s nuclear case based on the report of the IAEA chief which is expected to come out in a few days.

Amano’s comments were followed by a flurry of reports and negative news by certain media which predict a total breakdown of the talks. But, Iran’s ambassador to the UN nuclear agency said, “For years Amano has said that he is not in a position to fully confirm that there is no undeclared atomic activity in Iran. It is what has been included in the [agency’s] reports over the past few years, but some individuals seem to think that his remarks are new.”

Reza Najafi further said, “… It should be taken into account that the agency has adopted a similar stance for all countries which have not signed up to the Additional Protocol. In other words, it cannot give assurances about the absence of undeclared nuclear sites and as a result cannot declare that all nuclear activities in those countries are for peaceful purposes.

“The same applies to Switzerland which has been implementing the Additional Protocol for about ten years. A look at the IAEA’s annual Safeguards Implementation Report (SIR) for 2014 proves that. In the case of Switzerland, the IAEA has yet to draw the so-called Broader Conclusion for a State as a whole, [namely that ‘all nuclear material remains in peaceful activities’].

The IAEA director general has the responsibility to submit a technical report, and the Board of Governors will issue a resolution to announce its final decision.

A senior expert in nuclear energy has who has analyzed Amano’s interview, the next IAEA report and the Board of Governors’ final decision, says that the report by the IAEA director general on Iran’s Past Issues [nuclear dossier] and baseless charges made against Iran’s nuclear program between 2000 and 2003 is expected to come out in the next few days. This report will be a basis for the Governors Board to make its final decision on whether to declare Iran’s nuclear case over, a case which has served as a weapon at the hands of the West to build up pressure on the Iranian people.

They [Western countries] referred Iran’s case to the UN Security Council claiming that at a point in time Iran had been seeking to develop nuclear weapons. The [review of] Iran’s case dragged on for years, and after releasing multiple resolutions which were unfairly issued against Iran, the case is now waiting for Amano to submit the result of his investigations and reviews in a few days’ time.

It comes at a time when the director general of the UN nuclear agency has said that “the assessment will not be black and white”. His comments have been looked at from different angles.

I believe Amano is treading a path which makes him unable to verify the peaceful nature of Iran’s nuclear program. At the same time he does not want to say Iran’s nuclear program has been 100 percent problem-free. The reason why the agency is adopting such a position is understandably clear. For years they have put pressure on the Iranian people based on unfounded allegations [that their nuclear program has not been peaceful]; now they don’t want to admit that their past measures have been baseless.

They brought so much pressure to bear and issued resolutions against us using the same tool. So they cannot issue a white report on Iran’s nuclear program now. On the other hand, if Amano issues a black report, naturally the path to declaring the PMD case closed would be blocked. That is why he describes his report as neither black nor white but gray to allow the Board of Governors to make a decision in this regard.

Although the report is important, what is even more important is the decision of the Board of Governors because the allegations leveled against Iran have been politically motivated and everyone knows that the US, Israel, Britain and France have built a PMD case against Iran on political grounds.

So when the director general issues the report, under the Joint Comprehensive Plan of Action, the board should settle the PMD case in a political decision. That is 90% likely to happen in the coming days, because they need to declare Iran’s case as normal in order for JCPOA to be implemented.

As [Deputy Iranian Foreign Minister] Abbas Araghchi has openly said if they fail to declare the case as normal, Iran won’t implement the provisions of the nuclear deal. So the report Amano is to release within three days is only a first step. The next stage – a decision by the Board of Governors – is very important and sensitive.