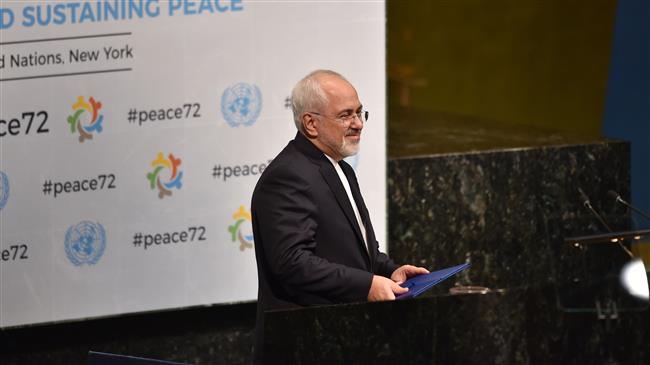 Iran's Foreign Minister Mohammad Javad Zarif says the time has come to move away from hegemonic illusions which are causing strife in the Middle East.

Zarif made the remarks while addressing the 72nd High-level Meeting on Peace building and Sustaining Peace at United Nations Headquarters in New York on Tuesday.

“Conflict prevention requires focusing on the root causes, including the mutually reinforcing afflictions of occupation, foreign intervention and extremism. Additionally, advancing hegemonic illusions or attempting to achieve security at the expense of others through exclusion and block formations, have invariably caused tension and conflict, and led to destructive arms races,” he added.

Zarif also noted that Persian Gulf countries must join forces in order to maintain regional peace instead of trying to become regional powers.

“It is crucial to now shift to a new paradigm based on joining forces to create strong regions, instead of anyone seeking to be the strongest in our region. And shifting from forming security blocks to accepting security networking. Both are predicated on respect for the interest of all stakeholders–large and small–coupled with a win-win philosophy. In the current inter-connected world, no country’s security can be assured at the expense of others,” he noted.

On Monday, Zarif said that era of zero sum games is long gone while addressing the Council on Foreign Relations on Monday in New York.