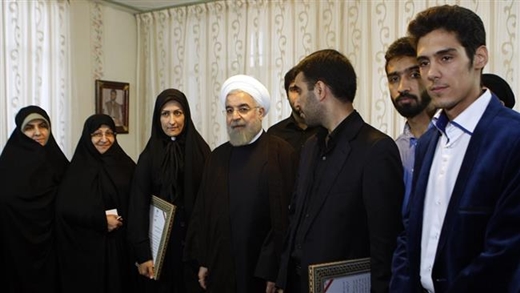 The Mazar-i-Sharif incident serves as another piece of evidence that the Iranian nation and officials have always been the victims of terrorism, said President Rouhani.

Iranian President Hassan Rouhani has honored the memory of the Iranian diplomats killed by Taliban militants in the Afghan city of Mazar-i-Sharif 17 years ago, saying that the Islamic Republic has been the victim of terrorism from the very beginning.

“The Mazar-i-Sharif incident serves as another piece of evidence that the Iranian nation and officials have always been the victims of terrorism,” Rouhani said in a meeting with the diplomats’ families in Tehran on Tuesday.

Apart from Mazar-i-Sharif, the Iranian embassies and diplomats have also been targeted by terrorists in other parts of the world, he said, adding, “This shows that the Islamic Republic is an anti-terror government and also proves wrong the claim by some countries that Tehran supports terrorism.”

No one imagined at that time that the terrorists might attack and kill Iran’s consulate staff in the northern Afghan city since according to international conventions, the diplomatic centers and embassies are considered safe places, the Iranian president further said.

He also pointed to the role of the intelligence services of certain countries in the Mazar-i-Sharif incident, adding that the terrorists in today’s world once again enjoy the support of Zionists and some Western countries.

Rouhani also vowed that Tehran will never give up its anti-terror bid.

So many of the Iranian elites have been martyred since the victory of the Islamic Revolution and the terrorists are still operating against the Iranian nation and we are reciprocally fighting terrorism, Rouhani stated.