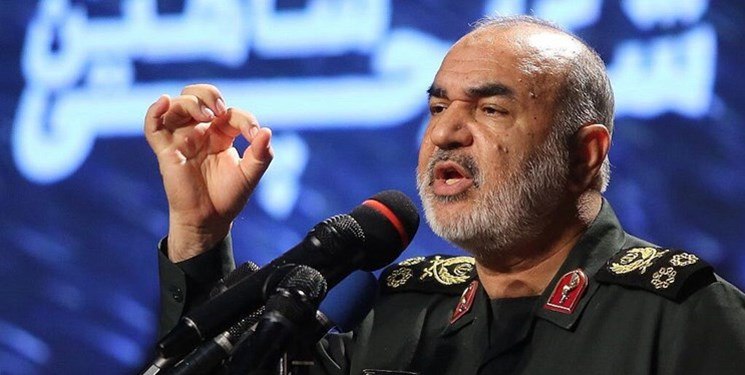 The commander of Iran’s Islamic Revolution Guards Corps has said Iran has withstood the US sanctions which were in fact a global scheme aimed at bringing the Islamic Republic to its knees.

General Hossein Salami noted that even the US itself would not withstand such a sanctions regime but Iran did thanks to the prudence of the leader of the Islamic Revolution and the patience of the Iranian people.

Salami also said now the worst of the sanctions against Iran is over. He added that the enemies joined hands to defeat the Islamic Revolution.

Salami however underlined that now Iran’s adversaries are in retreat and they have conceded defeat in the fight against the Islamic Republic of Iran.

The general also referred to the Covid pandemic. He said Iran’s foes wanted to see the Islamic Republic buckle in the face of the disease but now the Coronavirus is exacting the highest casualties on the enemies themselves.

According to Salami, Iran is now powerful in the real sense of the word and is the only country in the world that does not let big powers decide its fate. The IRGC chief referred to a US general’s comments about Iran. He quoted him as saying Washington is trying to avoid a military confrontation with the Islamic Republic which is too powerful to defeat. Salam also said the Iranian people will not be demoralized by the psychological warfare of the enemies.

He however urged all Iranians most notably youths to be vigilant. Salami added that the adversaries do not just occupy territory but they seek to win people’s hearts.