Iran’s President Shouldn’t Be Afraid of US: Cleric 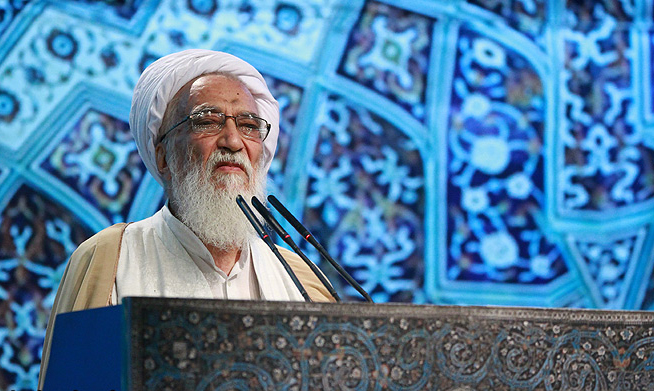 A senior Iranian cleric says the Iranian president should not be afraid of the United States, and should rather be able to counter the US and the Israeli regime.

“The president of Iran should not be afraid of the US,” Ayatollah Mohammad Ali Movahedi Kermani said in an address to worshipers at the weekly Friday prayers in the Iranian capital.

He should rather be able to offer an iron fist to the US and Israel, he went on to say.

The top cleric also urged the presidential candidates to avoid giving false promises that are impossible to be carried out, according to a Farsi report by ISNA.

“People should pick somebody who abides by, and is determined to enforce the precepts of Islam,” he added.

He said people should not fall for a handful of campaign slogans, but, before making their choice, ought to study the track record as well as positive and negative points of the candidates who have been qualified to run for president

Ayatollah Movahedi Kermani also called for the live televised broadcast of the forthcoming presidential election debates, saying the measure would boost the nation’s insight and knowledge about the candidates.

The live broadcast of the debates among the presidential candidates would be “one of the best ways” to enhance the Iranians’ awareness and help them identify the best hopeful, he added.

The senior cleric made the remarks after Iran’s Election Campaign Monitoring Committee decided on Thursday to call off the live broadcast of debates and to cover the debates in recorded version instead.

The decision has drawn widespread criticism among Iranian officials and people, and is expected to be revised or finalised in another session on Saturday.

Elsewhere in his remarks, Movahedi Kermani called for a massive voter turnout in the country’s upcoming presidential election.

He said massive participation of people in the presidential vote will show the Islamic Republic of Iran’s establishment is powerful and enjoys grassroots support.

He then touched upon the process of vetting the hopefuls, which is a duty of the Guardian Council.

“If any candidate has an objection to the Guardian Council’s decision while it is vetting the hopefuls, he should write a letter to the council to be considered. But he should accept the council’s final decision, and not kick up a fuss [over the issue,]” he said.

“[After the 2009 election,] some individuals defied the law, created problems for people and brought disgrace upon themselves,” he underlined, urging everybody to comply with the law.

The interim Friday prayer leader also said the president should lead a simple life, reach out to the needy and avoid cronyism.

“The president should also be able to boost economy and pay attention to production and job creation,” he added.

He also said the president should dedicate himself to serving the people.