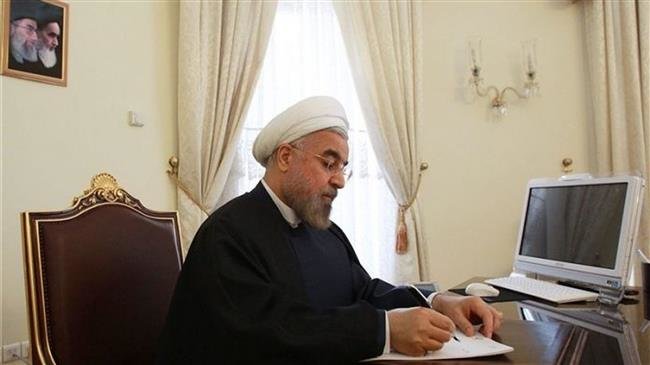 Iran's President Hassan Rouhani has congratulated Hojjatoleslam Ebrahim Raeisi on his appointment as the new Judiciary chief, expressing his readiness for mutual cooperation.

In a message released on Saturday, Rouhani highlighted the importance of the Judiciary in the Islamic establishment as well as its responsibility to strengthen social capital and people’s trust in the system.

“The judiciary of the Islamic Republic of Iran is the most important symbol of our Islamic system’s resolve to defend people’s rights, implement justice and ensure social security,” he said.

“Without a doubt, carrying out this important mission will be possible with the judiciary’s independence, away from factional and partisan considerations, and disregarding the pressure of some media and propaganda powers.”

Rouhani also voiced the government’s preparedness to cooperate with the Judiciary.

“I hereby express the government’s readiness to cooperate and interact with the Judiciary to realize the noble causes of the Islamic system and fully implement the Constitution of the Islamic Republic of Iran,” he said.

Raeisi was the Islamic Republic’s former attorney general and the chief custodian of Astan Quds Razavi, the organization managing the affairs of the Holy Shrine of Imam Reza (PBUH), the eighth Shia Imam.