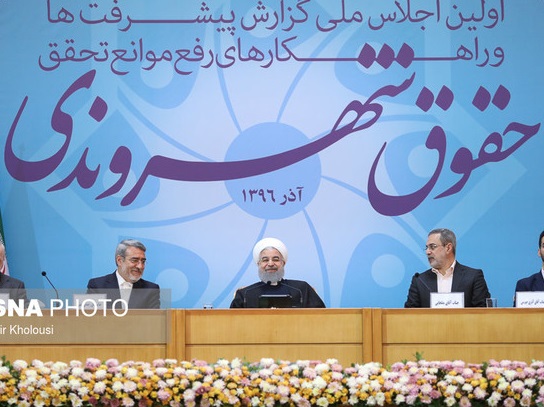 Iran’s president Hassan Rouhani says people are entitled to criticize and raise questions about the performance of his administration.

President Rouhani delivered a speech on Tuesday which revolved around civil rights. Rouhani seems to have revived the election ambience in response to the “#I_regret_it” campaign which recently challenged him by drawing up a list of his unfulfilled promises.

While highlighting people’s right to ask questions, the president took as good omen the questions raised about the spending package proposed by his administration for the next Iranian year beginning March 21, 2017.

He called on people to continue criticizing the government and overseeing how the country’s budget is spent.

The president also touched upon the Iran nuclear deal known as the Joint Comprehensive Plan of Action (JCPOA).

Addressing those opposing the agreement, Rouhani said, “They shouldn’t pin their hopes on Trump. The JCPOA will remain, and we will continue [to implement] it.”

People Should Monitor Us

President Rouhani said “We should open up the atmosphere and make it transparent,” adding, “I want people not to leave next year’s budget [bill] alone and see for themselves what is envisioned in the spending package.”

He said the spotlight should be turned onto the details of the budget bill and “all apparatuses should announce where they have spent the [current year’s] budget.”

“We should go into transparent and glass rooms,” the president noted.

Rouhani noted that people should oversee the government’s performance.

“Right the day after the budget bill was presented to parliament, a whole lot of activities kicked off in the virtual world. How beautiful! All people came to the scene, and expressed their views and criticisms. I kiss their hands. You people should criticize the person who is serving you. People have the right to know how much budget is allocated to what government institution,” said the president.

“People say that such and such institution has received several billion [Rials] in funding, and they raise an objection as to why some institutions are given so much budget. People’s opinion is top of everything. If most people believe too much funding has been allotted, they they’re right. What the majority of people say, is right.”

I’ll Keep My Promises to You

The president also vowed to make good on his elections pledges.

“As president, I will live up to my promises, and I want you people to keep your promise, too. We started the work together and should continue it. Rouhani needs your views, support and criticism at all times as long as the 12th administration is in office. Ask questions and we will answer. I put my life on the line to fulfill my promises. We have dozens of problems ahead. If we join hands, we can solve the problems,” he said.