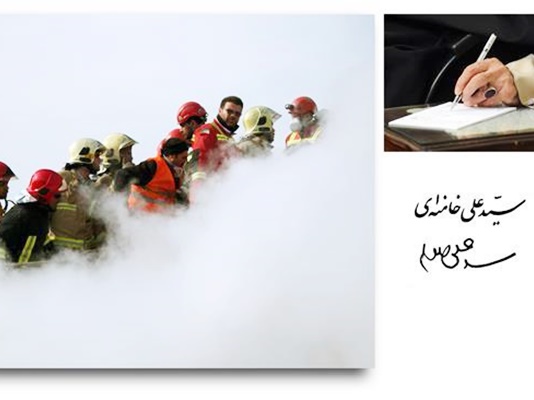 Leader of the Islamic Revolution Ayatollah Seyyed Ali Khamenei in a message eulogized the Iranian firemen who lost their lives while trying to contain a huge fire at the site of a high-rise in downtown Tehran, which later collapsed and killed several firefighters and citizens.

The Leader issued a message on Sunday ahead of the funeral procession, which was held in Tehran early on Monday for the “brave and faithful” firefighters.

Ayatollah Khamenei said the firefighters ventured into the burning building in order to save the lives and property of their fellow countrymen and sacrificed their lives for this purpose.

Ayatollah Khamenei added that the firefighters once again revived the memories of the sacrifices made by Iranian soldiers during the period of the Sacred Defense, which is a reference to the eight-year Iraqi imposed war on Iran in the 1980s, Press TV reported.

Here is the full text of Ayatollah Khamenei’s message released by the Leader’s official website:

Now, after many bitter nights and days of concern and exploration, it is time to record and revere the memory of the glorious and heart-wrenching sacrifice made by faithful and courageous firefighters of the Iranian nation and (it is time for) everybody to know these men, who must be truly called low-profile and devoted heroes, and keep their lesson in their minds.

These chivalrous men entered the fire and rubble with amazing bravery in order to save the lives and property of their fellow countrymen and risked their (own) lives and sacrificed themselves. They once again revived the memories of sacrifices made in the period of the Sacred Defense (eight-year Iraqi imposed war against Iran in the 1980s) and proved that when it comes to taking risks to fulfill one’s obligation, the faithful Iranian embodies the firm determination and exemplary courage and offers on the path of God the commodity of his life without asking any questions.

The bereaved families and the entire Iranian nation must be proud of this determination and valor that arise from faith, and scholars must take into account this phenomenon in their analyses and assessments of Iran and faithful Iranians.

This incident was sorrowful, on the one hand, while being pride-inspiring, on the other hand. These (firefighters) are martyrs on the path of a difficult service. They fulfilled a risky duty and, God willing, will never be forgotten.

I mourn these loved ones and others, who lost their lives in Plasco incident, sharing the grief with their families and survivors, and ask the Almighty God divine mercy for them (firefighters) and patience and (spiritual) reward for these (their survivors).

I also thank all organs and people, who shouldered a heavy mountain of work and effort, perseverance and concern during these ten bitter days and nights with all their power to save the lives of the firefighters and other people trapped (under the rubble) and pulled off a big task through cooperation and empathy, and (I) pray for them the divine reward.