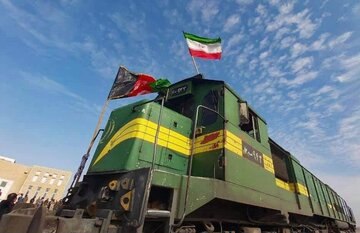 Iran’s first consignment of exports has arrived in Afghanistan via the Herat-Khaf railway, and was warmly welcomed by Afghans.

The shipment which contained 500 tonnes of cement was dispatched on a trial basis to detect possible problems and challenges on that route.

The railway will be officially inaugurated in the coming days by officials of both countries.

The construction of the railway got underway in 2007. The railway connects the city of Herat in Western Afghanistan to Iran’s rail network. When completed and inaugurated, the route is predicted to transport two million tonnes of goods and 200 thousand passengers annually.

The Khaf-Herat railway is significant not only in terms of transportation of commodities and passengers, but also because it links northern Afghanistan to Iran and the high seas and even European countries. Moreover, the railway will also facilitate the transportation of goods to East Asian nations via Afghanistan.