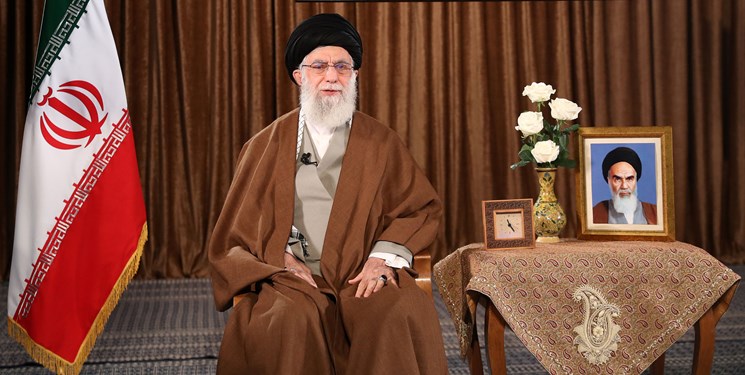 He specially thanked the medical personnel across the nation for their major contribution to the national campaign against the disease.

The Leader said the coronavirus outbreak is also “a test for the world, both for governments and for nations,” he noted.

He then praised local media and officials for giving the public good information about the pandemic.

“A lot has been said about the figures, the very good measures that have been adopted and the recommendations given by authorities, and enough information has been given in that regard,” said Ayatollah Khamenei.

Ayatollah Khamenei drew a comparison between Iran’s handling of the coronavirus outbreak and that of other countries. He dismissed the way certain other government’s dealing with the issue.

“[It is not acceptable to see] That a government seizes masks and gloves which belong to another government and redirects the shipment toward its own country, something which happened with regards to several governments in Europe and the United States,” the Leader noted.

He also reprehended what happened in countries where shopper rushed to supermarkets and shops to buy supplies more than they needed, resulting in empty shelves all over.

“Some people even began to fight over some rolls of toilet paper,” he said.

“And some individuals were queueing up to buy guns as they felt they were in danger,” Ayatollah Khamenei said.

He noted that older patients were discriminated against in some countries as their governments argued that treating the elderly is not a priority.

“This is the behaviour that some Western nations showed, which is the logical and natural outcome of the philosophy ruling the Western civilization,” he said.

He said philosophies in the West deal with such issues as “materialism, laicism,” etc.

The Leader underscored that the coronavirus is a major ordeal for humanity, but is dwarfed by many other problems.
“In the past, we had numerous problems both in the world and in our country, which were no less important than this incident (the coronavirus outbreak),” He said.

“For example, 32 years ago around this time, [former Iraqi ruler] Saddam [Hussein]’s warplanes waged gas attacks on some parts of our country and killed thousands of our and their own people, and, of course, all major powers supported Saddam” he said.

“Some of these very Western countries supplied Saddam with nuclear weapons, and until now, none of them has answered for that,” he noted.

“Millions of people were killed in major wars around the world like the two world wars. The same goes for the Vietnam war and other wars like the war on Iraq,” he noted.

Ayatollah Khamenei underlined that the COVID-19 pandemic should not deflect our attention from enemy plots.

Elsewhere in his remarks, the Leader praised efforts by Iranian authorities and ordinary people to help fight the coronavirus. He touched upon support plans drawn up to help the needy, and called for those programs to be enforced immediately.