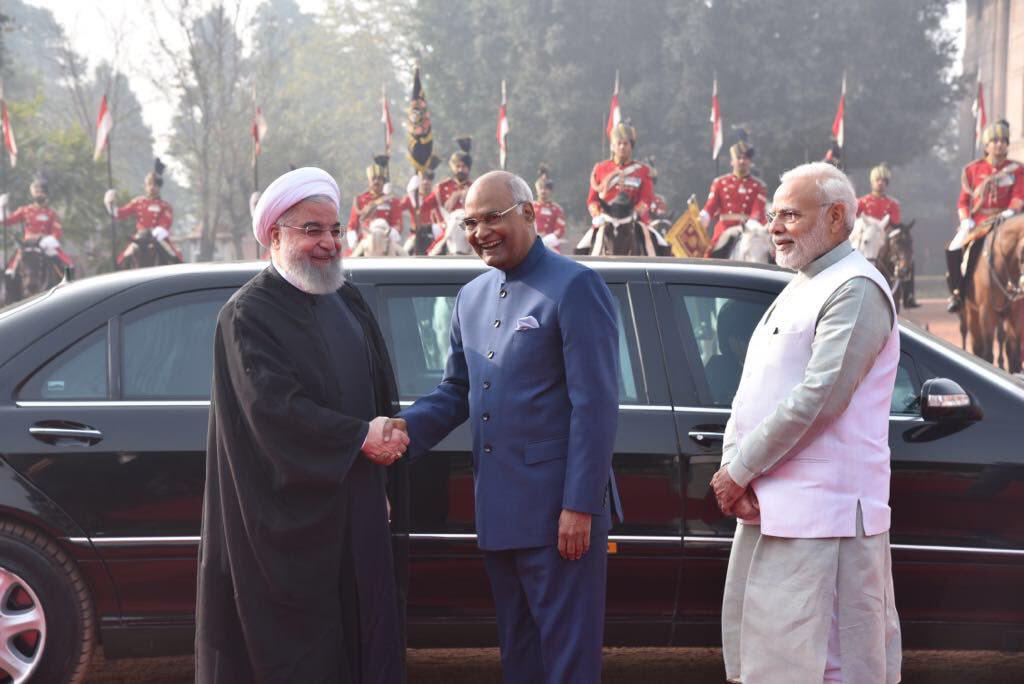 Iran’s President Hassan Rouhani has been formally welcomed by the Indian officials at the presidential palace in New Delhi.

Winding up his two-day Hyderabad visit, Rouhani arrived in the Indian capital late Friday night and was accorded a ceremonial reception. The ceremonial welcome was held at the Rashtrapati Bhavan with the presence of the country’s President Ram Nath Kovind and Prime Minister Narendra Modi.

According to a Farsi report by IRIB News Agency, the ceremony was followed by the wreath laying at the memorial of the late spiritual leader of India, Mahatma Gandhi.

On Saturday, Rouhani and Modi will discuss international issues as well as expanding the political and economic relations between the two countries.

Signing Memoranda of Understanding in various sectors including trade and commerce, purchasing locomotives, healthcare and medicine, traditional medicine, agriculture, the post, transportation, consular affairs and extradition of criminals, women and children affairs are among the topics that the sides would talk about.

After signing of the documents, the Prime Minister of India and the Iranian President will take part in a press conference.

Ministers of foreign affairs, roads and urban development, industry, mine and trade, oil and the economic affairs and finance, as well as about thirty businessmen and industrialists from private sector accompany Hassan Rouhani on this trip.

President Rouhani will also deliver a speech at the Observer Research Foundation later in the day.

The India-Iran Business Summit will be held with the participation of Iran’s economic affairs and finance minister and a group of Indian and Iranian merchants and industrialists with the aim of looking into the ways to boost trade and economic relations between the two countries.

According to IRIB, the volume of trade between India and Iran is more than $9 billion a year, and the two sides are trying to increase this volume.

Banking problems, development of the Chabahar port, and India’s investment process in Chabahar and rail cooperation are the most important issues that Rouhani would discuss with Indian officials. Ha

A major geopolitical decision is that Indians can invest in Iranian infrastructure and connectivity projects in rupees, making Iran the only country apart from Bhutan and Nepal enjoying this. This helps Iran bypass sanctions and boost ties with India.

On a three-day visit to India at the invitation of Modi, Rouhani addressed Muslim leaders and scholars in Hyderabad on Thursday night and also visited Qutub Shahi tombs, a historic site.

The visiting dignitary later offered prayers at historic Makkah Masjid in the old city and addressed the congregation. This is the first visit by Rouhani, who is the seventh President of Iran, after taking charge in August 2013.

India and Iran have collaborated on many key projects with the most notable being Chabahar port in southeastern Iran that was inaugurated on December 3, 2017 by Rouhani. The port opens up a new strategic transit route between Iran, India and Afghanistan.