A look at Iranian newspaper front pages on Oct. 22

IFP has flipped through the front pages of the Iranian dailies on Wednesday and picked headlines from 18 of them.

The passing on Tuesday of Chairman of the Assembly of Experts Ayatollah Mohammad-Reza Mahdavi Kani at the age of 83 was placed on the front pages of almost all newspapers on October 22. The Iraqi premier’s meetings with Iran’s Supreme Leader Ayatollah Khamenei and President Rouhani were in the news too. And a pledge by the president that his government will release the results of a probe into illegal scholarships granted when the previous government was in power made headlines in some dailies.

Afkar: “The government has not slipped into a budget deficit,” said Iran’s economy minister.

Afkar: “The Supreme Leader will lead the last rites for the late Ayatollah Mohammad-Reza Mahdavi Kani,” is the daily’s front-page pick, reporting that the Iranian government has declared two days of national mourning following the passing of the chairman of the Assembly of Experts. 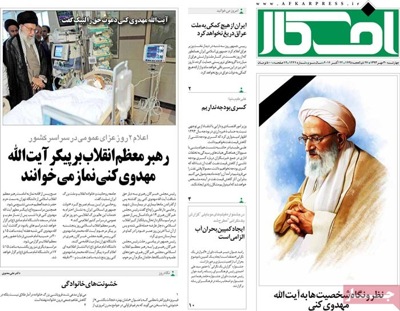 Aftab-e Yazd: “Passenger vehicles are not people’s private space,” is what the daily picked to report on a bill Iran’s parliament has adopted to support those who promote virtue.

Aftab-e Yazd: “The gasoline produced by petrochemical plants is not standard,” said the chairman of the Petrochemical Subcommittee at the Iranian parliament. 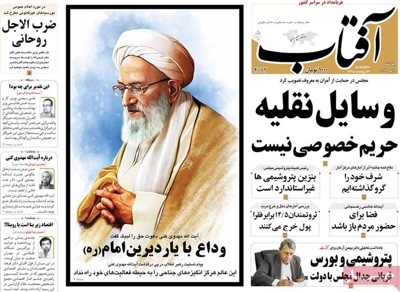 Arman-e Emrooz:“A number of spies have been arrested in Bushehr,” said Intelligence Minister Seyyed Mahmoud Alawi. The suspects were trying to carry out surveillance for foreign countries in the southern province.

Arman-e Emrooz: “The Principlists are not capable of returning to power in the absence of [former President Mahmoud] Ahmadinejad,” said Sadegh Zibakalam, a university professor and political analyst, in an exclusive interview with the daily. 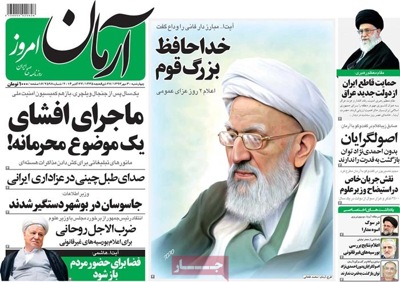 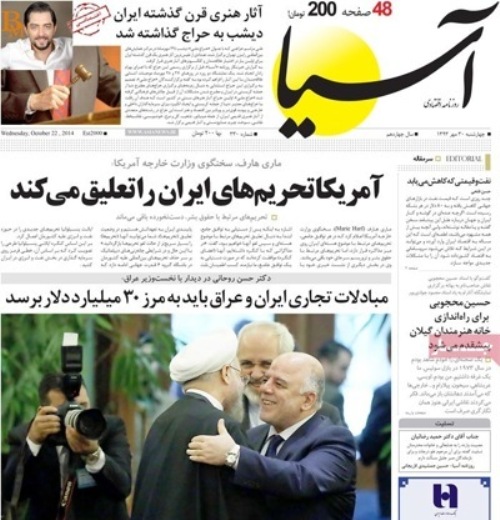 Asrar: “News that [former President Mohammad] Khatami and Mohammad Reza Aref do not see eye to eye is far from true.” The daily quoted Mohsen Rahami, a senior figure in the Reformist camp, as ruling out rumors that there is a rift between the former president and his second in command. 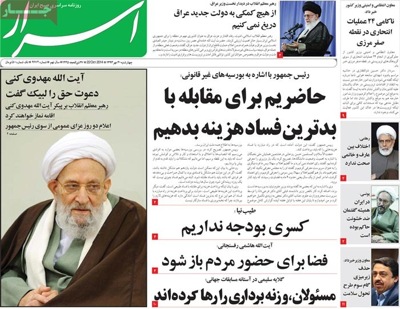 Ebtekar: “Off-camera football matches,” is the daily’s front page headline, reporting that the Football Federation has finally carried out its threat not to allow IRIB to carry soccer matches live unless the broadcaster pays hefty sums for broadcast rights. 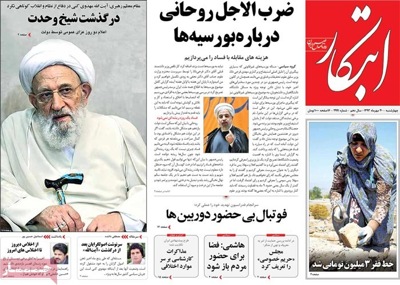 Eghtesad-e Pooya: “Iran will hold an exclusive exhibition in China.” 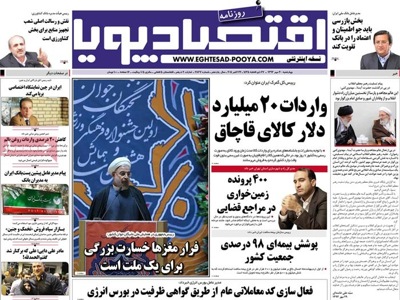 Emtiaz: “Some university branches might be shut down,” said Acting Minister of Science, Research and Technology Mohammad Ali Najafi. His comment came after more than 200,000 university seats remained vacant for the new academic year. 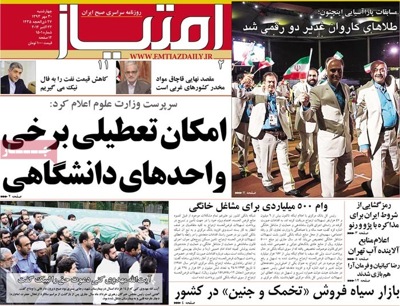 Ettela’at: “People will soon be informed about the violations in the university scholarships’ case,” said President Rouhani in reference to an investigation into illegal scholarships granted under his predecessor Mahmoud Ahmadinejad.

Ettela’at: “We doubt the honesty of those who claim to be fighting ISIL,” said Supreme Leader Ayatollah Seyyed Ali Khamenei in a meeting with the visiting Iraqi premier.

Ettela’at: “Iran will do what it takes to help the Iraqi government,” said Iran’s President Rouhani.

Ettela’at: “Iran has to rely on tax revenues to make up for a recent slump in oil prices,” stressed Economy Minister Ali Tayyebnia. 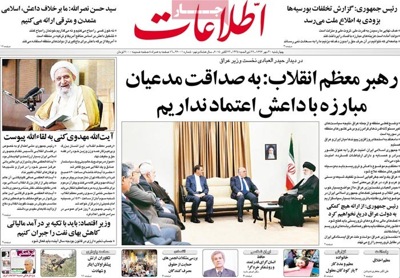 Hambastegi: “A third installment of Iran’s frozen assets has been deposited into the country’s account,” said the Central Bank of Iran. 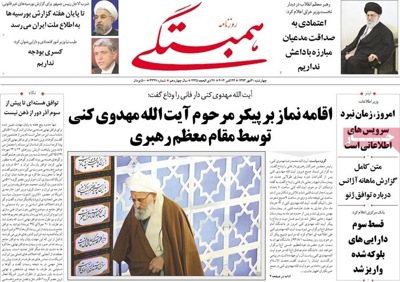 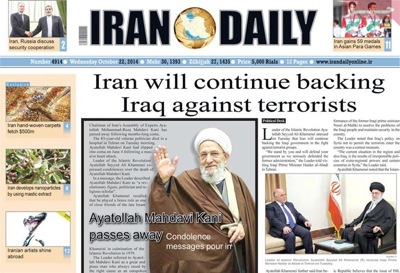 Jamejam wrote that failure of the Football Federation to comply with the laws was the reason why IRIB did not air the football match between Persepolis and Saipa on Tuesday. 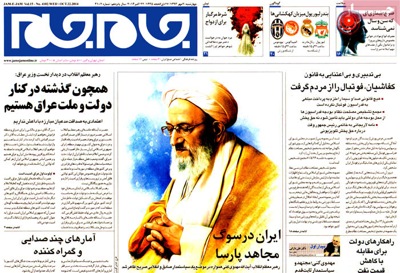 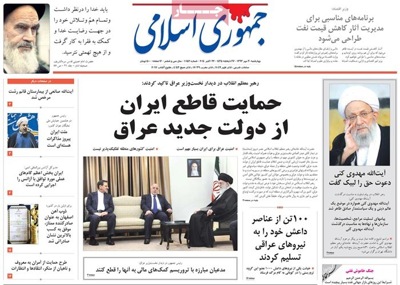 Kaenat: “We take the drop in crude prices as a good omen,” said the economy minister. 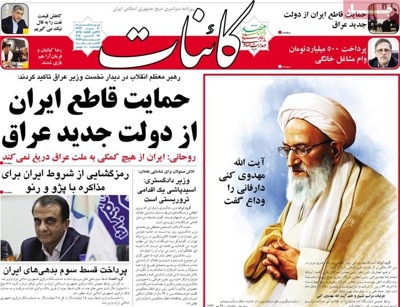 Kayhan: “Iran stands by Iraq and will lend support to the Baghdad government in earnest,” Iran’s Supreme Leader told the Iraqi prime minister. 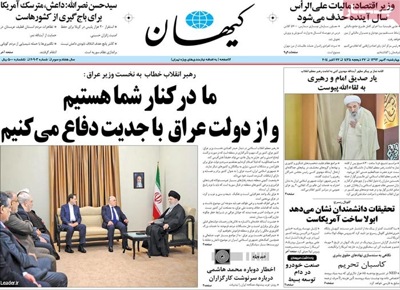 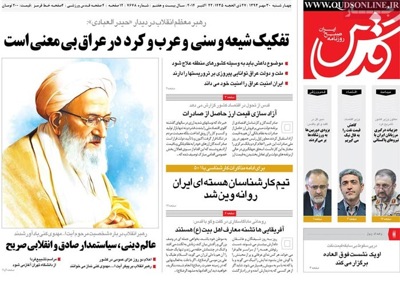 Roozan:“Parliament seats should not be exclusively open to a group of hardline, monopolist MPs,” said former President Mohammad Khatami.

Roozan: “Peugeot has accepted the terms set by Iran Khodro Industrial Group [One of the country’s two top carmakers] to make a comeback to Iran’s car market.” Sharq: “My letters are in keeping with my statutory duties as a member of parliament,” said Ali Motahari, a Tehran deputy, in response to his critics. 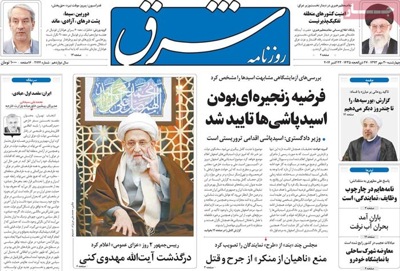