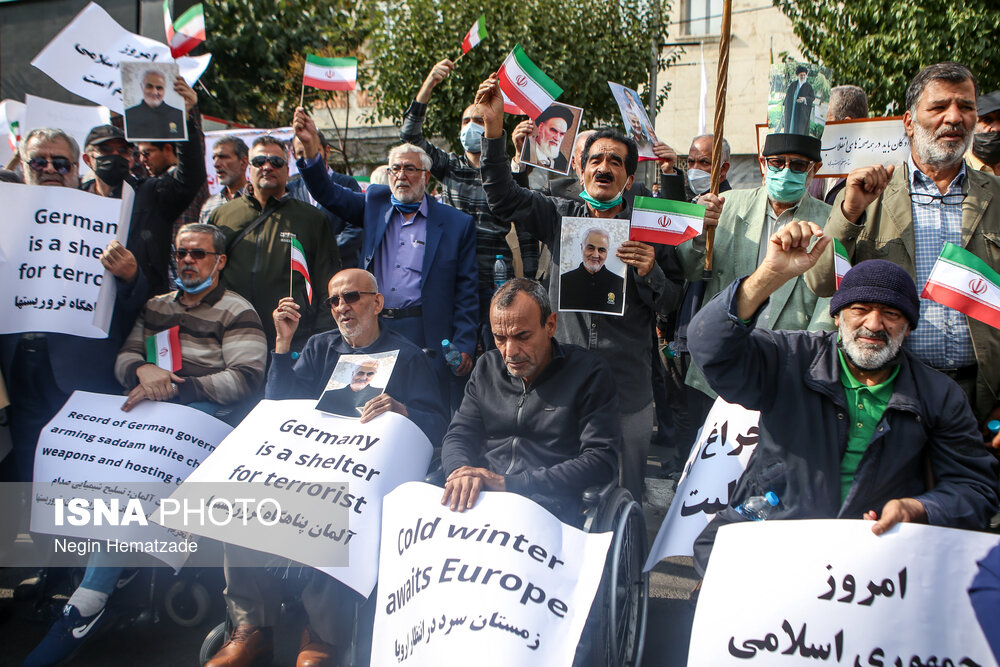 A group of Iranian people, mostly those disabled in the 1980s Iraqi war and families of those martyred in the aggression, have held a demonstration against Germany — a supplier of chemical arms to Iraq under ex-dictator Saddam Hussein — over Berlin’s support for the recent riots and unrest in Iran under the guise of backing “human rights.”

The demonstrators, among them war veterans still suffering from exposure to Iraqi gas attacks, gathered outside the German embassy in the capital, Tehran, on Tuesday to voice their outrage at what they described as Berlin’s hypocritical stance on the issue of human rights.

The participants chanted slogans against the US, widely viewed as the main sponsor of the recent deadly riots in Iran, and its European partners, including Germany.

Last week, German Foreign Minister Annalena Baerbock came out in support of the rioters wrecking havoc in Iranian cities and claimed, “The human rights situation in Iran is deteriorating day by day.”

She said Germany would tighten entry restrictions on Iranians beyond an already announced EU sanctions package in response to the human rights situation in the country.
Iran’s Foreign Ministry later summoned the German ambassador to Tehran to protest the “meddlesome comments.”

Also on Sunday, Berlin said it was examining along with the European Union whether to classify Iran’s Islamic Revolution Guards Corps (IRGC) as a terrorist organization for what it calls “crackdown” on “protesters.”

A series of initially peaceful protests broke out in Iran around mid-September over the death of a young Iranian woman in police custody.

Soon afterward, the protests took a violent turn as rioters and thugs stepped in and engaged in deadly acts of violence, vandalism, and desecration of sanctities.

Iran says people have the right to protest, but riots are unacceptable and will seriously be dealt with.