Iranian, Cuban Nations Standing Up to US Pressure: Rouhani 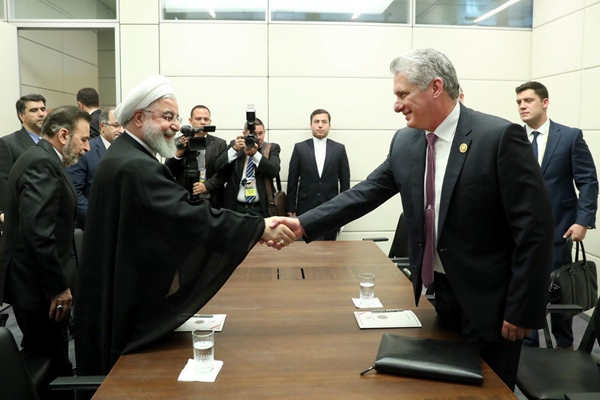 The Iranian president says hegemonic powers have no choice, but to submit to the resistance of independent nations like those of Iran and Cuba.

Hassan Rouhani told his Cuban counterpart Miguel Díaz-Canel that the two nations are paying the price for their resistance and insistence on independence in the face of Washington’s policy of acquisitiveness.

“We regard the Cuban nation as a people of struggle and resistance,” said President Rouhani in the meeting held on the sidelines of the 18th Non-Aligned Movement (NAM) summit in the Azeri capital, Baku.

“Cuba and Iran are paying the price for their freedom. Our nation’s resistance is well known in the Middle East, and if it weren’t for your resistance, the US would have dominated not only Cuba, but [the whole] Latin America,” he said.

“Cuba and Iran have always enjoyed warm and friendly relations as well as similar stances on their regional and international policies,” he said.

“At this juncture, the two sides should explore new channels to expand mutual economic relations in the energy sector,” the president added.

Elsewhere in his remarks, President Rouhani said the two countries have common ground on key international issues, namely terrorism, the Zionist regime of Israel and the need to further strengthen NAM.

He touched upon the “positive economic indicators” in Iran despite US pressure.

“In spite of the United States’ maximum pressure, we have been able to weather problems with reliance on domestic potentialities,” said the president.

The Cuban president, in turn, said his country has always condemned Washington’s hostile policies toward Iran.

He also referred to Washington’s violation of its agreements with Havana as well as its withdrawal from the Iran nuclear deal known as the Joint Comprehensive Plan of Action (JCPOA).

“Cuba condemns the US pullout from the JCPOA, and we have always supported the ideals of the Iranian government and nation,” he added.

He said Cuba has also suffered as a result of the United States’ unfair policies. He noted Washington now seeks to stop fuel from reaching Cuba, but the country will weather this problem as well in cooperation with its people. He also called for closer economic ties with Iran.