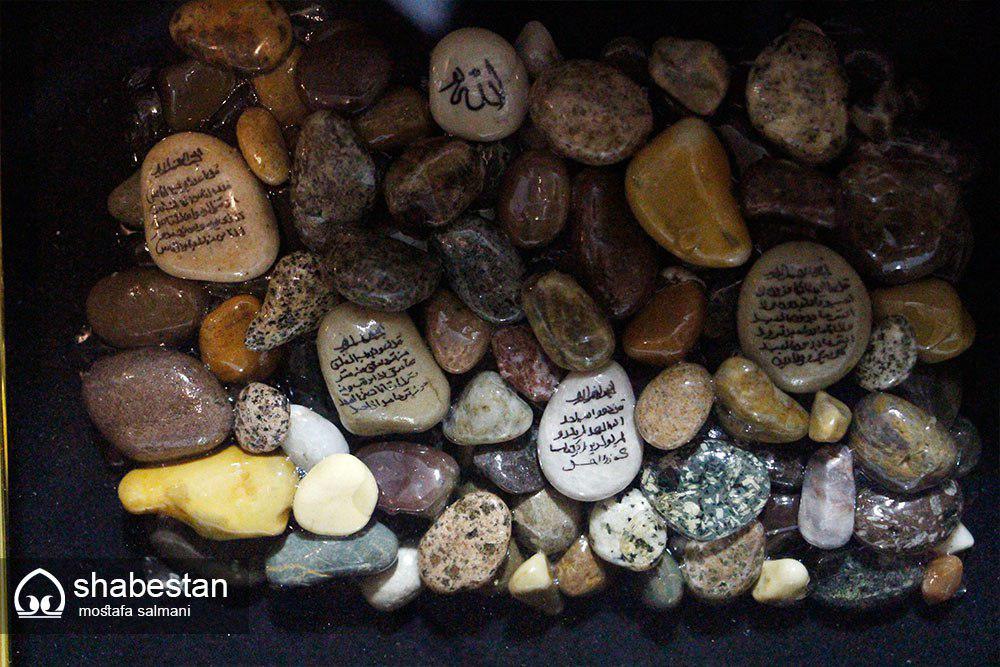 An artisan in Iran has turned his house into an exhibition of superb pieces of craftsmanship: stones on which are written the verses of the Quran, the holy book of Muslims.

Seyyed Hossein Poor-Razavi, who lives in Iran’s central city of Yazd, has concentrated on a unique type of craftsmanship since a couple of years ago.

He has inscribed the verses of the Quran on small pieces of stone, some of which have been created using only the naked eye.

According to a report by IBNA, one of his works of art is a small piece of stone with an inscription of more than seven sections of the Quran (each section is called a Juz’), visible only with a magnifier.

Mr. Poor-Razavi, 49, recalls how his business went south a few years ago, when his firm producing cultural products went bankrupt. He then began a new career as a street vendor to earn a living.

The artisan says he even used to sleep on the streets when he turned to street vending and lived in a ramshackle house to make ends meet.

But Hossein did not give up hope and made a great deal of effort to restart his career as an artisan.

He says he has been attracted to cultural and artistic activities for as long as he can remember, particularly to calligraphy and penmanship.

With a high school diploma, Hossein used to inscribe the verses of the Quran on stone pieces and sell them even when he was a street vendor. One day, an idea crossed his mind: Put the works of art on display to improve his living conditions.

At first, he could not grab the attention of the authorities, but his hard work paid off as he could finally convince the officials to hold an exhibition of his works of art –the Quran inscription on pieces of stone.

“I was overjoyed. I didn’t have enough money to buy a suit, so I got a suit on credit from one of my acquaintance’ shop to get prepared for the meeting (with president). Before the trip (to capital Tehran), I wrote a letter to submit it to the president, but on the eve of the meeting, I looked through Rumi’s book, and as soon as I opened the poetry book, I saw a poem saying ‘We endowed you with such dignity! But you are making a request from my own man? And you are soliciting the God’s own man, while you are not submitting any request from us?’. I tore the letter right there, and did not ask the president for anything when I met him,” Hossein told IBNA.

“Afterwards, my works and the Quranic inscriptions were exhibited all over the country, until I had a private meeting with the Supreme Leader of the Revolution, who regarded me with favor,” he added.

Hossein says he was also invited to mount exhibitions in the Arab countries. “My stone inscriptions were unveiled in Iraq, and I was known as ‘the first scribe of the Quran on stone’, and I had several meetings with the officials of various Arab countries and the Marja’s (religious authorities).”

The Iranian artisan said he has not gotten any loan from anywhere, and the state organizations have not provided him with any financial support for holding the exhibitions and festivals either.

“I have acquired my assets in life thanks to Quran,” he explained.

Hossein has pledged himself to allocate 10 percent of his assets to cultural activities every year. The income from his exhibitions and festivals goes to the orphans and the children of labor.

Seyyed Hossein Poor-Razavi has turned his house into a public exhibition of works of art, entitled “The House of Affection”.