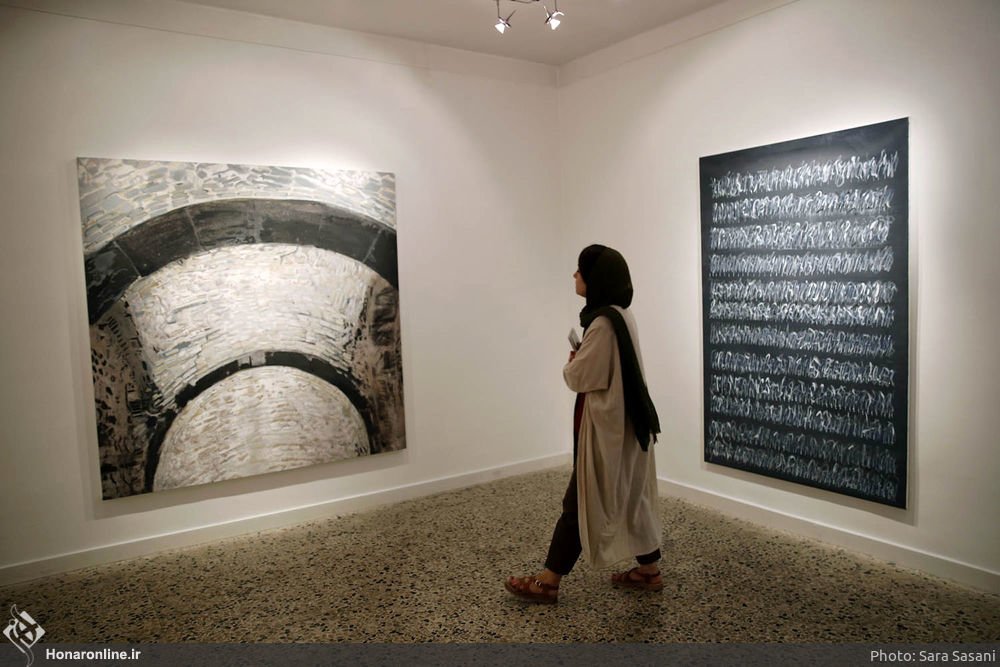 Combining western arts with eastern mysticism is one of the leading features of the paintings of Iranian-Armenian artist Sonia Balassanian.

These days, Homa Gallery in Tehran is hosting a warmly-received exhibition of Sonia’s paintings, which is a combination of poetry and geometrics.

Inspired by the oriental culture, Sonia creates artworks with western themes. The artist’s exhibition displays a collection of works from the different stages of her artistic development.

Some of Sonia’s paintings include some irregularly interconnected lines resembling some repeated words. This gives the audience a sense of facing a piece of writing. The artist has used only cold and dark colours to convey the special themes in her mind.

In some of her works on display in Homa Gallery, the artist deals with some architectural elements from the east and uses geometric forms, fabrics and layouts as main themes of her abstract paintings. For example, in one piece, she has used white bricks within a barrel vault to portray the image of Iranian markets.

In her minimalist pieces, Sonia uses a combination of ochre color with blue, grey and white reminding the audience of the classic Persian architecture.

She takes advantages of her homeland’s art to recreate the monotonous rhythm of brick buildings in an innovative form.

Sonia is an Iranian-Armenian artist who left Iran in 1965 for New York, and has since been living there. She holds a BFA from the joint program of Pennsylvania Academy of Fine Arts and the University of Pennsylvania, as well as an MFA from Pratt Institute in Brooklyn, New York. She is also an alumnus of the Whitney Museum Independent Study Program. Her numerous works have been exhibited internationally.

Sonia has won several prestigious awards from Philadelphia and New York’s museums and universities.  Her works are now held in Tehran Museum of Contemporary Arts, Armenia’s Contemporary Arts Center and personal collections in various parts of the world. They have also been put up for auction at Christie’s and Tehran auctions, among others.

She is one of the most influential artists in Iran’s modern art, and has created some leading artworks.

Sonia’s works will be on display in Homa Gallery until October 16.

What follows are photos of her works retrieved from Honar Online: